[Author’s note for the humor-impaired: This is political satire. It is not an actual letter from Trump. I can’t believe I need to include this disclaimer. Geez. – TEJ] 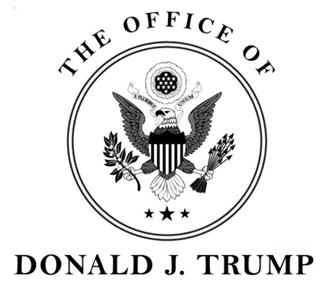 This is your 45th President, Donald J. Trump, here to set the record straight. Lately the Radical Left’s FAKE NEWS media has been airing a series of horrible lies about me and the roughly 47 federal and state civil and criminal investigations targeting me – all of which are totally made-up racist witch hunts.

Every single lawsuit is based on nasty lies. I mean, who are you going to believe: 500 newspapers, most major news networks, the Department of Justice, the House January 6th Committee, the FBI, Attorneys General from multiple states, constitutional scholars, Harvard Law professors, and Liz Cheney? Or me?

All the people attacking me are just jealous they’re not as rich, powerful, or successful as me. I will soon be restored to the White House where I belong. If you don’t believe me, just ask any of my 437 million loyal QAnon followers. They are great people. They love me. And I love them (so long as they help me win in 2024).

My fellow Americans, this is your rightful president, Donald Trump. I’m here to set the record straight. When it comes to corruption, I’m like a perfect Eagle scout compared to the countless nasty crimes and scandals of Obama. Next to Obama, I’m better than Jesus.

I didn’t want to write you this letter (along with my request that you send me another $100 for my legal defense fund). I really didn’t, but if people are going to attack me over a few minor misunderstandings, then I need to fight back. So I’m here to tell you that what they’re trying to dig up on me is nothing compared to the thousands – maybe hundreds of thousands (nobody really knows for sure how deep the corruption goes) of shocking scandals committed by my predecessor while he was in office.

First, all those documents I took to Mar-a-Lago were mine – except for the ones that the FBI planted there. I de-classified all of the documents – even the nuclear codes – like any president has the absolute right to do. All I had to do was simply close my eyes, click my heels, and say three times, “There’s nobody as smart as me.”

But Obama has literally thousands and thousand of documents he stole from the White House at the end of his presidency. He is keeping them – totally against the law, mind you – at his own secret hideout, which the leftwing media and the radical National Archives call “The Barack Obama Presidential Library.” And he refuses to give any of them back. That’s because he’s worried I’ll finally locate his Kenyan birth certificate. It’s probably hidden in some file cabinet in the basement, right next to Hillary’s emails. At least, that’s what Mike (My Pillow) Lindell told me.

And now New York state’s racist, incompetent Attorney General Latitia James has filed a civil lawsuit trying to wipe out my business and go after my three kids, Ivanka, Don Jr, and whatever the other one’s called. She claims I have committed dozens of examples of tax fraud and bank fraud by misrepresenting the values of my real estate holdings. That’s an insane lie and an attack on our country.

If you look at the fine print at the back of the appendix, written in Latin, you’ll see in each document that it says, “The estimated value may be off by a factor of 2,000 percent. I cannot be held liable for any misstatements of value because, let’s face it, I don’t read.” So, if the banks and the IRS relied on my written statements, well, frankly, that’s on them. Besides, who really knows what anything’s worth these days with the market as volatile as it is?”

But whatever minor rounding errors in estimating the value of my properties may have occurred, that’s nothing compared to the financial scandals lurking in B. HUSSEIN Obama’s closet. He sold his house in Chicago for $15,000 OVER-ASKING, in a down market. And the inspection failed to report that the wood floors totally needed to be re-finished. Very suspicious if you ask me. Why isn’t anybody investigating that?

When Biden stole the 2020 election, it was the biggest fraud in our nation’s history – unless you count the time Obama said he’d get us out of Afghanistan – and didn’t!. Okay, so I didn’t either, but he didn’t do it first, so it’s totally his fault. Such a liar. 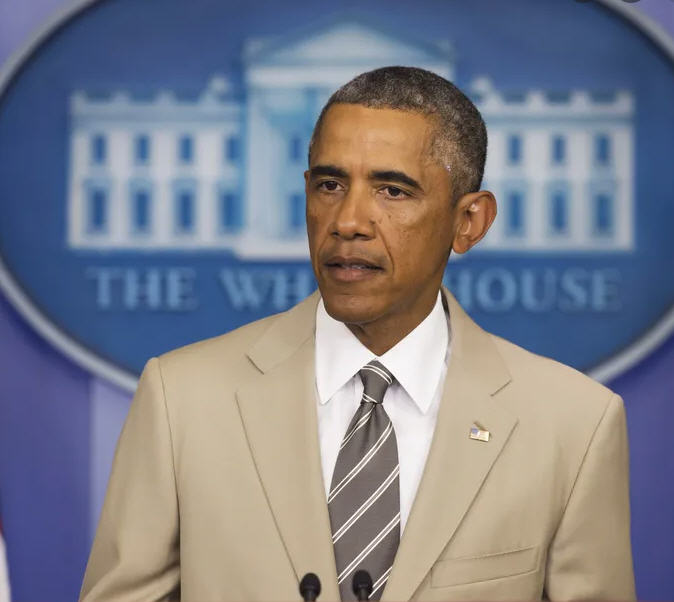 Obama should have been impeached for this fashion faux pas alone. A beige suit in the White House? Seriously? And his boring tie didn’t even go all the way down to his crotch like my ties do. Truly criminal.

Ask any MAGA supporter of mine. They’ll tell you that the 2020 election was stolen. And the only proof the Dems have to offer is that their candidate got 7 million more votes than me. But most of those were from mail-in voters (and blacks and gays), so those votes should never have been counted.

After the election, I created my totally legit Election Defense Fund and raised over $250 million. Now the January 6th Fake Select Committee is claiming I ripped off all those donors. And their only argument is that they can’t find any evidence the Election Defense Fund ever existed. I say, they’re not looking hard enough.

They also claim I pocketed all the money for my own personal gain. But that’s simply not true. I split the money with Jared, Ivanka, and some Saudi friends who guaranteed that if I needed to move there I could not be extradited. Besides, if my supporters want to give me their money, that’s their patriotic right to do that. Did I mention, they love me?

But Obama once was caught stealing from the American people in broad daylight. He stole an entire pack of Topps Major League Baseball cards. And yet he never served a single day at Guantanamo. Perhaps because he was seven at the time. Lame excuse.

A tiny number of women – by which I mean way less than a hundred – have accused me of sexual assault or rape. But they’re all liars – like Stormy Daniels, who claimed I paid her $130,000 to stay quiet about our affair. Not true. I only paid her $100K. (The other $30K was for an espresso maker she sold me.)

Again, this is little league stuff compared to Obama. While president, he was caught helping a woman undress in the Lincoln Bedroom. I refuse to believe his lame explanation that the woman was his wife Michelle and she had just gotten her dress’s zipper stuck.

Because of all the pressure of being president, I will admit that I golfed now and then. I can’t count the exact number of times I golfed at Mar-a-Lago or one of my other resorts at taxpayer expense. I want to say seven, but I could be off by a couple (thousand). But according to Rudy, Obama golfed over 25,000 times during his presidency – that’s practically all he ever did. So lazy. And not once in all of those outings did he ever score a hole-in-one. But I made ten holes in one while president. Just ask Lindsay Graham. He’ll vouch for me. (Because I totally own him.)

Speaking of cheating, I was told by Sean Hannity that he once saw Obama blatantly foul Rep. Louie Gomert in a pickup basketball game with members of Congress. He clearly shoved Louie in the process of shooting. But Obama got away scot-free. No charges were ever filed. Clearly the ref was on the take. 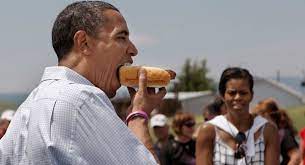 Obama claimed he advocated healthy eating. He said he liked arugula. What is arugula, anyway? Probably some Muslim food. But he lied. Here he is eating a chili dog at the Iowa State Fair. What a hypocrite – something no one has ever accused me of being – EVER!

But perhaps the biggest scandal of all is that Obama was even allowed to serve as president in the first place. In addition to not being born here, and secretly being a Muslim terrorist, he’s black. Since when did we allow those kind of people to run for the presidency?

When I’m restored to the throne in 2024, I will put an end to allowing blacks and other minorities to hold political office – or vote or live near me. In the meantime, keep following me on my Truth Social. Check out today’s post in which I reveal the shocking truth about Joe Biden: When he was a kid, he used to stutter. Such a loser.

Your Majesty Your REAL President,