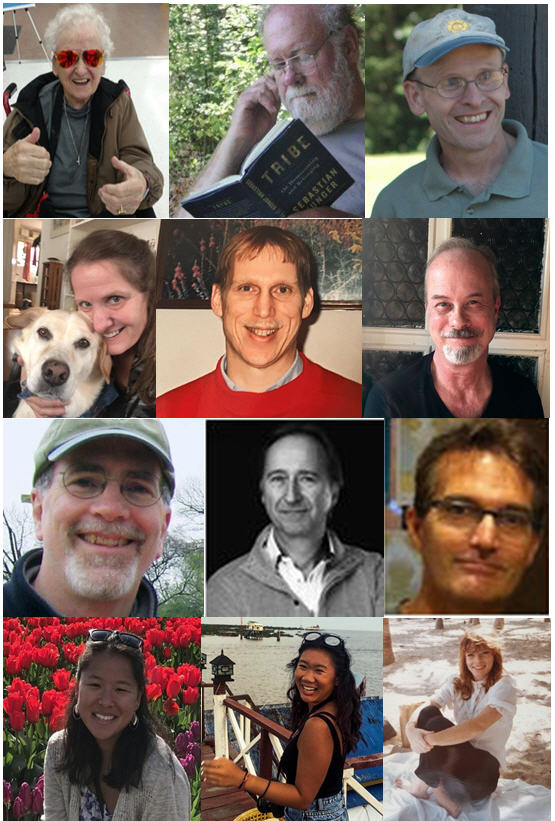 Growing up, I had many dedicated teachers. A decades-belated thank you to Mrs. Perkins (4th grade), Mr. Nash (English), and General Verbeck (biology), and Mr. Vandenberg (Latin I, 2 and, thanks to my friend Steve Fisher, who knows what he did, Latin 3). My learning, however, did not end with my formal education. I have been blessed to have had many capable managers and mentors throughout my career. Thank you, Alan Horton, Jerry Parichy, Valerie Sanford, Chris Noble, and Cynthia Clay, to name a few.

As I look back over the past 65 years, I realize that some of the most impactful educators I’ve had have been family members and friends. There are twelve individuals who stand out as the most influential teachers in my life. This week’s column is about them.

My mom, Betty Clark (she remarried). At one month shy of turning 100 years old, she is, amazingly, still with us. A WW II veteran and mother of five, she endured a difficult marriage to a husband who suffered from serious, untreated mental illness and chronic anger management issues. She had the courage to leave this situation in an era when women did not seek divorce. Having not worked outside the home in 28 years, she set out to get a job and became a dietician at the VA. She reclaimed life by traveling to many countries, her favorite being Israel. Now in a nursing home, she rallies on, showing all around her that she still has a wit. She is always game for a good laugh – just check out her photo above, taken at age 97. People ask me, “Tim, why is it that you smile so much?” That’s simple. Thanks, mom.

Bob Jones. Our nine year age gap kept me from getting to know my oldest brother when I was young. But as I entered my career, we became re-acquainted by discussing career and life challenges. Bob became a “big brother” mentor to me and taught me the importance of understanding myself and my impact on others. From Bob, I learned to look for the positive in situations and people. As a result, throughout my career, I posted on my wall these words: “Catch them doing something right.”

John Jones. My second oldest brother, five years my senior, John was the All-American boy. Growing up, he was my role model. I wanted to be just like him. I still do. He is modest to a fault and has always been the rock of our family. When there was a crisis, John was the steady hand willing to intervene to calm the waters. Over time, I have come to appreciate how kind and caring a person John is – and funny. And he taught me to love sports and playing board games – I can’t forget about that!

Betsy Jones. I could write a book about my younger sister. She has been the editor of my blog these past 11 years. (I’ll be curious to see how she edits this description of her.) When we were little, because we were the two youngest, we became very close. She is the historian of my childhood, with a memory of details I had long forgotten. Nobody I know has endured more hardship and heartbreak than my sister. But every time she has been knocked down, she gets back up. Betsy is the most resilient person I have ever known – and one of funniest. She has an expanding universe of friends because like me, they see in her one of the most giving, selfless people you will ever find. [No edits. Thanks – Your editor]

Bill Anderson. If you want to know why I sometimes (okay, usually) act like an 11-year-old, blame Bill. Bill is my oldest friend. We met in 4th grade because our dads were best friends. For the past five decades, Bill has reminded me of the importance of staying young at heart and not taking life too seriously. When we get together, we revert to high schoolers. Bill is a person of deep faith, and one of the most high-integrity people I have ever known. He has taught me, better than just about anyone else, the importance of working to maintain a close friendship, despite the physical distance between us most of our lives.

Steve Fisher. Some may ask where I developed my warped sense of humor. Look no further. Steve is the funniest person I have ever met. I launched this humor blog, in part, to honor him for teaching me how to make others laugh. We met in 7th grade and he has kept me howling with laughter ever since. Steve also taught me the meaning of courage. Ten years ago, he almost died from a devastating illness that left him with life-altering physical injuries. But through it all, he has demonstrated enormous courage and self-deprecating humor. Steve is my hero.

Dale Willman. Dale and I met early in our modeling careers. Yes, we were models, for a one-off fashion shoot, hired by a  mutual friend, for reasons neither of us will ever understand. Shortly after we met, my father died quite unexpectedly. Dale responded in a way that sealed our lifelong friendship: he came to the funeral. He turned out to be an unexpected source of strength that I leaned on in my time of grief. A journalist, Dale has worked and taught all over the world, and instilled in me the value of broadening my worldview. Like me, Dale has a small teddy bear called Grumpy that he takes to exotic places, although only my Grumpy has been to the North Pole (get over it, Dale).

Mark Gravel. I worked in the newspaper industry for 9 years and there is only one person I keep in touch with from that era: Mark. In addition to possessing a wickedly sharp sense of humor (he has co-written several of my humor articles), Mark loves doing surprises and practical jokes. But even more importantly, Mark exudes a genuineness, a kindness, and a deep desire to put the needs of others before himself. In the dictionary under the word “Gentleman” there should be a picture of Mark, for he truly is just that – even if he is Canadian, like my wife.

Tim Fletcher. I have always admired Tim’s first name. But beyond that, my soft-spoken friend is a remarkable dad. We became friends while working at an internet startup, When I was struggling with trying to unlock the mysteries of parenting my then teenage daughters, Tim repeatedly provided an understanding ear and wise counsel to help me become a better dad. For several years, Tim has grappled with a serious illness. But through it all, he has accepted his physical limitations with positivity, grace, and a stubborn refusal to be blocked from pursuing a full life.

Rachel Jones. From a young age, my elder daughter has demonstrated a strong independent streak. I will always remember when at four years of age, as I tried to help her, she insisted, “I do it myself, Daddy.” She became extremely self-reliant and responsible far beyond her age. Her sense of determination and her work ethic astound me, be it on the soccer field or pursuing her passion of becoming a nurse. Now 26 and a cardiology nurse, Rachel has matured into a confident, hardworking adult. Most inspiring is her deeply caring heart, for her patients, her family, and her cats (not sure in which order). She teaches me all the time what it means to put the needs of others before one’s own.

Emily Jones. When she was a teenager, she and her sister taught me the importance of patience in parenting. At 4’11” tall, Em has always been the shortest person in any group photo. But she’s never let that stop her from pursuing the highest of goals in life, and with a passion. She is fearless and doesn’t let obstacles deter her from her dreams. Extremely smart and resourceful, in college she once asked me, “Dad, do you know anybody at Space X?” Of course, I didn’t. Two days later, using just LinkedIn, she corralled an interview. A week later, Space X hired her in their elite intern program. Over the years, she has amazed me with her giving heart, often surprising my wife and me with the most extraordinary gifts out of the blue (including my very cool Space X shirt.)

Michele Rushworth. When we said our wedding vows, I told her, “I want to grow old with you.” Those words ring just as true 33 years later. I am proud of everything she has achieved with her art. She has helped to push me outside my comfort zone to try new things (even fish). A voracious reader, she has educated me about other cultures, history, and science. It was Michele who suggested we pursue international adoption. She had the idea for us to move to an island I had never heard of. And whatever I learned about being a caring, patient parent, I learned in great part from my best friend’s example. Our daughters could not have asked for a better mom. It has been a privilege and a joy to be growing old – that is, older – with my wife, Michele.

I have had many truly wonderful friends throughout my life, including many people who space constraints simply don’t permit me to mention. As I get older, I’ve learned that true wealth is measured not by the size of one’s bank account but by the number of meaningful friendships we have in life. On this scale, I’m rich beyond my wildest dreams. I owe a debt of gratitude I’ll never be able to repay to these twelve funny, kind, extraordinary teachers, and to others not mentioned (due to witness protection constraints). Thank you all.

© Tim Jones, View from the Bleachers 2020. Edited by Betsy Jones