According to Google, I am a Terrible Person 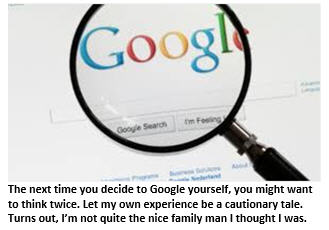 Until about twenty minutes ago, I thought I was a decent person, a loving father and all in all, a fairly responsible citizen. But I am starting to have my doubts. You see, I recently published a humor book on parenting called YOU’RE GROUNDED FOR LIFE – Misguided Parenting Strategies That Sounded Good at the Time.

I sent out press releases and then did a quick online search to see whether any of my promotional activities were paying off. So, I googled my name – TIM JONES. Uh oh. The results were rather surprising.

On the positive side, I found several search results about the book and recent VFTB articles I’d written. But that’s not all I discovered. Turns out I’ve lived a far more interesting and varied life than I’d ever realized. And I have a dark side. A disturbingly dark side.

Apparently, despite what my kids have been saying about me for the past ten years, I am “highly intelligent.”

So intelligent, in fact, that I earned a Ph.D. and joined the ranks of the faculty at Cardiff University in Wales.

According to my profile in the Faculty Directory, my interests include “airborne particulate pollution” and “remote sensing in resource exploitation.” I have no idea what any of this means. I must have been drunk when I wrote my faculty profile. Had you asked me before today what my interests are, I would have listed football, sleeping and bacon.

I don’t like to brag, but I also discovered that I am perhaps the most educated humor writer in the world. In addition to my law degree and my MBA from The Ohio State University (and my Ph.D. from Cardiff), apparently I also have a medical degree. Otherwise, how else to explain my thriving plastic surgery practice in Edmond, Oklahoma?

In fact, one of my clients, who I totally forgot about, wrote this testimonial on my JonesPlasticSurgery.com website:

“Dear Dr. Jones: Thanks for the good work you do. I didn’t even have a bruise! My skin feels great.

You are most welcome, Mary J. But I must give credit to my medical support staff. They’re the real heroes.

And it looks like when I was not doing breast enlargements or Botox treatments, I played a little ball – as a relief pitcher for the Pittsburgh Pirates.

After my aborted career as a baseball player, it sounds like I decided to explore my artistic side. I even started my very own band.

My second band was sort of a fusion jazz-country-Gregorian Chants-polka blend, pulling heavily from the Celtic music I came to love during my time lecturing at Cardiff U in Wales. I hope you’ll go to my Tim Jones & The Dark Lanterns Facebook page and LIKE it when you get the chance. Thanks.

But as I searched further, I started to uncover several darker things about my personal history that apparently I have been repressing for a very long time. For example, to my shock and dismay, it turns out I’m one of the lowest forms of life there is: a politician.

To make matters worse, I’m a Republican – and the Speaker of the Missouri House of Representatives, no less! How will I explain it to all my Democrat friends when they find out I must have voted for Bush in 2000? Apparently my most noteworthy achievement was joining several other Missouri politicians as a plaintiff in a Birther lawsuit against President Obama. My wife is going to be so ticked if she learns I’m a birther. So please, mum’s the word, okay?

But the bad news about me didn’t end there. I now appear to have some serious legal challenges ahead of me.

Looks like I may be doing a little time in the Big House. I swear someone must have drugged me because I have absolutely no memory of assaulting anybody – or, for that matter, becoming a Sergeant Major in Britain’s Royal Air Force. It’s all just a big blur.

Sadly, my dark slide into depravity did not stop with assaulting a fellow soldier. Apparently, this was just one of many steps along the way to rock bottom. My search results reveal that I have recently been sentenced to 100 years – for pimping!

I don’t know how in the world I am ever going to explain this to my family. Heck, my girls used to call me “Super Dad.” Now they’ll probably just call me “Super Bad”, which, as it turns out, is my pimp name.

I really can’t recall when my wretched descent into darkness began. It seems like barely 30 minutes ago I was in my PJs, on the couch, watching The Big Bang Theory and eating Cheez-its. How did I go so horribly astray?

But perhaps the most upsetting news of all is that I appear to have died – TWICE.

I guess I deserved to die, given the horrible person I turned into in recent paragraphs. On the bright side, I don’t recall feeling any pain – during either death. I know what you’re thinking, but please – no need to send flowers. Just send your condolences to my wife, won’t you? She deserved a better husband than who I apparently was. Just remember: Mum’s the word about my being a birther!