Myth-busting website Snopes.com revealed to be a hoax – according to Snopes.com 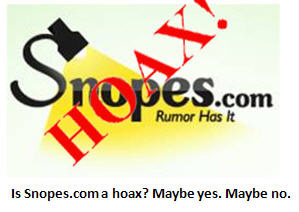 Visit Snopes.com, the myth-busting web site and you will discover that a lot of things you always thought were true were in fact LIES!

If you’re not familiar with Snopes.com, it’s a very informative website with a singular purpose: to validate or debunk incredible claims, warnings, and tall tales that circulate around the Internet. The site examines claims such as the infamous urban legend that told us that “for every person you forward this email, Bill Gates will donate $1 towards life-saving brain surgery for a five-year old girl named Tabitha.”

Just last week I discovered to my great relief that, according to Snopes.com, swallowing a watermelon seed will NOT cause a watermelon to grow inside you – unless, of course, you also consume Ortho plant fertilizer mixed with large doses of Miracle Gro potting soil, drink two gallons of water per day, and sit under a sun lamp with your mouth open for 30 minutes a day over two months. But even then, it probably won’t be edible.

Every day, people send me well-intentioned emails, passing along what they naively believe to be informative news alerts about some health scare or consumer safety risk. Almost always, these dire warnings turn out to be false – and I know this because I often verify the falsity of these ridiculous claims at Snopes.com – usually about 5 minutes after I’ve forwarded the well-intentioned dire warning email to 1,500 of my closest friends with an email subject line stating: Important dire warning: Pass this along to 1,500 of your closest friends! 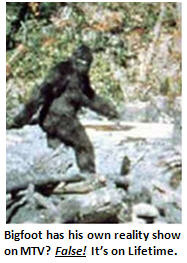 Here are just a few of the email tips I received in the past month, all of which turned out to be completely without merit: 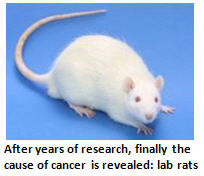 Perhaps you’ve received an email informing you that the radiation from your cell phone can pop popcorn or that drinking your own urine can add ten years to your life. Whatever the incredible claim or warning, the odds are Snopes.com has tracked it down. [Author’s note: While it’s conceivable that drinking your own urine may add ten years to your life, this regimen is pretty much assured to ruin any chance of ever getting married. ]  In 90% of the cases, Snopes.com will prove with convincing evidence the tall tale is just that – a tall tale.

I can’t count the number of times I wished I had checked out Snopes.com. Like the time I stopped taking daily showers for three months because I was told that most soap destroys your resistance to germs and can lead to disease – this based on a helpful email forwarded by someone I’d never heard of to another person I’d never heard of to someone named Bert to my mother. And who wouldn’t listen to their own mother? But had I just checked out Snopes.com first, I would have quickly learned two important pieces of information:

First: that this “washing with soap” scare was a fabricated urban legend with no basis in fact; and Second: that my mother is an idiot. (And I mean that in only the most loving way, Mom.)

Thanks to Snopes.com, I no longer fear flesh-eating bananas from Costa Rica or poisonous rat droppings in my box of Special K cereal, which will cause my internal organs to dissolve. I no longer worry that downloading Elf Bowl to my computer will trigger a virus that will erase my computer’s hard drive on Christmas morning. 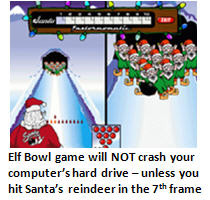 So imagine my shock when I found out this week that rumors were spreading that Snopes.com was itself a hoax. Snopes.com, true to its commitment to track down the truth or falsity of every Internet claim, conducted an in-depth investigation. Shockingly, Snopes.com concluded that in fact there was no credible evidence to support the existence of Snopes.com, and reported its findings at its web site, Snopes.com.

But interestingly, Snopes.com then conducted a further investigation and discovered something even more perplexing: Its subsequent study concluded that the alarmist claim by Snopes.com that it does not exist was itself just a nefarious hoax, and that Snopes.com was in fact real after all. It pointed to reams of statistical reports showing thousands of daily web site visits, to debunk claims that it did not exist.

But it didn’t end there. Shortly after that study, yet another Snopes.com investigation was launched, aiming this time to determine whether or not the previous Snopes.com report – which had reported that the Snopes.com report claiming that Snopes.com was a hoax, was itself a hoax – was in fact a hoax or not. It appears that Snopes.com has been caught in an endless loop of claims and counter claims about its own existence. As a result, the entire network of Snopes.com web servers overloaded and crashed – that is, if we are to believe that those web servers ever existed in the first place. At present, it is still unclear whether Snopes.com is a hoax or whether this writer is simply experiencing a really bad acid trip flashback.

So how will I know what’s true anymore? Without Snopes.com, I won’t know whether I should refuse to accept anyone’s business card ever again because it could be soaked in a dangerous drug which will completely erase my memory.  I worry about whether I might be asked by a company’s customer service automated phone menu to “please press #-9-0” – only to end up accidentally turning over my credit card information to Bulgarian Internet scammers who will go on a shopping spree with my VISA card. (Thankfully, it only has a $125 limit.)

And how will I ever know for sure whether those two teenagers living in my house these past two decades really are my daughters and not aliens from another planet planted in my house for the sole purpose of driving me insane and paying for their college education? One can never be too cautious these days. 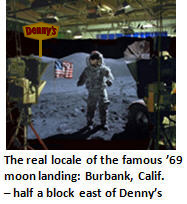 Without Snopes.com to turn to for answers, I’m confused and nervous. But there are three things I now know for a fact:

First: There never was a moon landing. All of them were faked, on a sound stage somewhere in Burbank.  Neil Armstrong was really just a character played by Hollywood legend Burt Lancaster. (That’s Burt in photo at right.)

Second: Global Warming is a complete hoax fabricated by liberal environmentalists intent on making people use their brains. I learned this on the O’Reilly Factor.

And Third: For every person to whom you forward this blog post, Apple CEO Tim Cook will donate $10 to build a hospital for starving kids in Wisconsin.