Thank You for Losing My Luggage

[The following is a true story.] 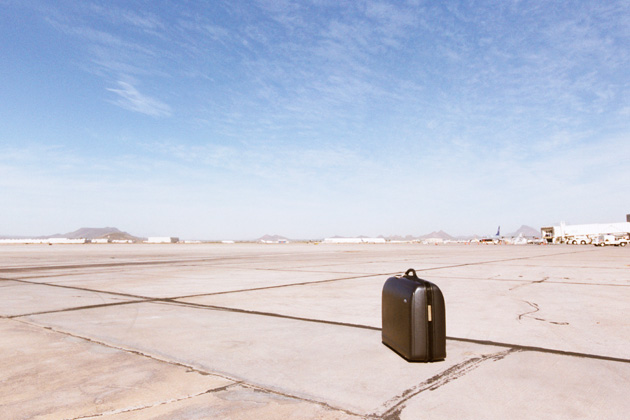 This is the true story of the time a major airline accidentally lost my luggage. Both my luggage and I are still in therapy over the incident.

I’m sorry. Did I write Customer Severance? Silly me. I meant “Customer Service.” Just like your airline meant to get my luggage from Seattle to Washington, D.C.

I hope I’m not catching you at an inconvenient time – though I have a nagging feeling you’re wading through a slew of letters just like this one. Perhaps you even have a whole department dedicated to lost luggage letters.

My boss was sending me to work a trade show. In preparing for my trip, I planned to take one small suitcase as carry-on, to avoid dealing with baggage claim – as much as I admire the delicate care always provided by your expert team of baggage handling professionals, mind you.

But then, the evening before my early morning flight, I received a most thoughtful robocall informing me that tomorrow’s flight would be quite full and advising me, due to limited storage capacity on board, to check my suitcase. Not wanting to be a disagreeable passenger, I dutifully complied.

Now, I’ll be the first to admit that my obeisance to your airline’s directive to check my bag is totally on me. After all, this is a free country. I could have chosen to ignore your message and brought my carry-on onto the plane. But had I done that, I never would have experienced the joy and satisfaction of sharing with you the story of what happened next.

When I arrived in D.C. at 10:00 pm, I figured I’d be snug in my hotel room snoring by 11:15. Graciously, your airline had other plans for my evening. I went directly to the indicated baggage claim carousel. I was impressed that within minutes, luggage came cascading down the conveyor belt – one piece after another.

10 minutes later I was feeling less impressed. 25 minutes later, a funny thing happened. Let me rephrase that: A funny thing DID NOT happen. My suitcase never arrived. I am relieved to report that of the 275 people on my flight, only one person’s parcel failed to reach its intended destination. Spoiler alert: it was mine.

Of course, I had foolishly packed my blood pressure, cholesterol, and half a dozen other life-saving medications in that bag, along with the clothes I would need for the trade show. I totally should have FedExed the lot. What was I thinking?

It was surprisingly easy to find your lost luggage office. Less surprising was that I was the fourth person in line. Not unlike waiting in the queue at Disneyland’s Space Mountain during spring break, I eventually reached the counter – at 12:01 a.m. I will say, your agent was quite polite as he placed the “CLOSED” sign on the counter directly in front of me and informed me I could come back at 6:00 a.m. when they reopened.

I must have looked even more desperate than I felt – or more menacing – because your representative grudgingly agreed to help me out. Again, this was totally my fault for keeping him late, due to my blatantly misguided decision to follow your airline’s instructions to check my baggage. I just hope your agent can find it in his heart to forgive me.

In his professional opinion, he concluded that I probably checked in too close to departure and that my luggage simply missed the flight. No doubt your rep was right to pin the blame on me. My bad, deciding to check my bag a mere two hours before the plane’s scheduled departure rather than on the previous Thursday.

When I asked if it might be on a later flight, I had to respect the fellow’s candor when he said, and I quote, “I have no idea where in the Hell your bag is.”  Perhaps he was feeling a little hangry.

Naturally I was hoping he would offer me a voucher to purchase clothes, since all I had were the T-shirt, shorts and Birkenstocks I wore onto the plane. He indulgently explained that my luggage should arrive the next day, and as a result, he was not authorized to issue me a clothing allowance.

I asked your charmingly helpful agent what impression he thought I might make at our trade show booth wearing my shorts and a T-shirt that read “People say I have A.D.D. but they don’t know what – Hey, look! A Squirrel.” He deferred to his supervisor, who was just getting off duty as well. The latter reluctantly okayed the clothing allowance. Then your baggage claim agent politely added, “Don’t go buying expensive Florsheim shoes or Calvin Klein shirts, as high-end clothing will not be covered.” I had no idea Calvin Klein made shirts. 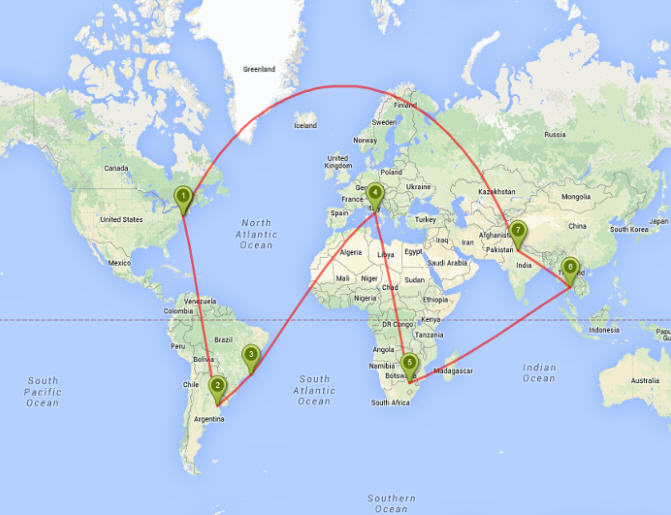 The actual route my suitcase took is apparently classified. But here is my best guestimate of its whirlwind world tour. All those sites in only three days!

The next morning at precisely 7:02 am, the most amazing thing happened. A customer service manager, no less, called to provide a most helpful status update. “We’re still looking for your luggage. We’ve not been able to locate it yet. All we know is it’s not in Seattle.”

In the interim, I was able to find a Marshall’s department store, which, in case you’re not familiar with their luxury brand, makes the clothes at Walmart look like a Paris fashion show. I purchased a shirt and slacks that were vaguely close to the required colors of our booth attire – and only two sizes too large, because that’s all they had in stock. On the plus side, people wondered if I had lost weight. Sweet.

Your crack team of Sherlock Holmes detectives finally traced the location of my luggage only two days later. It had apparently been loaded onto a plane bound for Rio or was it Buenos Aires? The good news is that the moment they finally found my precious cargo, they quickly re-routed it… to Atlanta. Did I mention my trade show was in D.C.? But hey, at least my clothes, meds, and I were now in the same time zone, so that’s progress.

I finally received my stuff just in time for my flight home to Seattle. I opted not to check my suitcase for that trip. I hope your ticket agent wasn’t offended by my insistence.

So, there you go. You can count on me to share my great appreciation on Twitter, Facebook and 11 other social media sites. Please pass along to your baggage handlers and everyone else involved in re-routing my luggage to South America, my heartfelt appreciation for everything they’ve done to restore my confidence in –  my decision never ever to fly “the friendly skies” of United Airlines again.