My Cat Buddy Announces His Bid for the Presidency in 2020 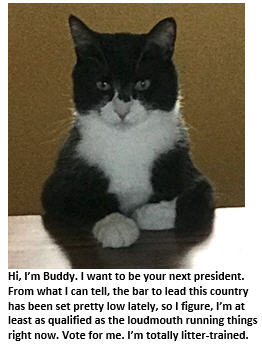 [Note: Tim Jones is on vacation (pause for applause and sighs of relief). Standing in is his cat Buddy, who would like to share an important political announcement. – Staff at VFTB]

Greetings, my fellow Americans. I am Buddy. Just Buddy. No last name, as far as I know. That’s me to the right. In case you think I look familiar, it might be because I bear a striking resemblance to another kitty, my uncle Blackie, who, you may recall, composed a very important message in this blog a few years ago. (What can I say, my human, Tim Jones, really sucks at naming cats.)

Ever since Donald Trump was elected president, my human has been pacing around his man cave, going on rants, like “How could such an inept buffoon be President?” and “The man is totally unfit for the office!” Now that I look at Trump, he does look terribly out of shape. He really should stop wearing those tight tennis shorts, if you ask me. He apparently has aspirations to become a bird, as he tweets all the time. I have no idea what he’s writing – but then, neither does he. I guess we are both illiterate.

Watching Tim scream at the TV each night as he watches Rachel Maddow or Lawrence O’Donnell describe the latest Trump abomination, it’s become as plain as the whiskers on my face that I could do a better job running this country. So, that is why today, I am announcing my plans to run for president. I realize some may view me as unfit as Trump, so I have hired a personal trainer to help me shed the kitty fat and get in shape.

You may be asking yourself, “Why should I vote for a cat?” After all, there’s never been a cat that sat in the Oval Office – unless you count President Clinton’s cat Socks. But I’m fairly sure Socks had limited veto power. So, why me? Where do I begin?

First, the only skeleton you’ll find in my closet is from a mouse I killed and left as a gift for my human. (He still hasn’t thanked me, by the way.) Full disclosure: Like Trump, I too have an embarrassing episode involving peeing on a bed. In my defense, I was only a kitten and not fully litter-trained.

Unlike Trump, I have never said an unkind word about Mexicans and never will – unless they take my spot on the couch. Then they’re dead to me. I will never give any foreign leader a reason to get angry with me or brush me off – unless they’re easily upset by cat fur on their Armani jacket. My breed tends to shed a lot. 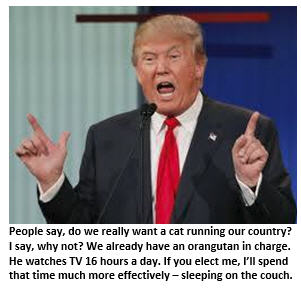 Many complain that Trump is a raging narcissist who thinks he’s the most important person in the room and that everyone else exists only to serve his every whim. Outrageous! And yet oddly familiar. Now that I process it… yeah, I guess I just described myself. Okay, forget I brought up this topic.

One thing’s for sure: If elected, I would not lower the dignity of the presidency by posting ALL CAPS diatribes on Twitter – because I don’t have opposable thumbs.

Also, unlike Trump, who is paid hundreds of thousands of dollars a year just so he can watch TV, tweet and play golf, my salary demands are extremely modest. All I ask is fresh crab every day, and steak tartar, oh, and on occasion, a fresh sparrow, lightly seasoned. And for God’s sake, please change the litter box more than once a month as my human currently does. Is that too much to ask?

Some people may say I am a dark horse. I say, look at me. Do I look like a horse to you? I believe I have a serious shot at winning, because I will never get us into a reckless, costly war – unless it’s a Kitten War – that website is just adorable. And I won’t waste billions of taxpayer dollars on something as foolhardy and unnecessary as Space Force. I will use those billions to build the world’s largest ball of string. Or maybe I’ll construct a great big beautiful WALL, to keep all those nasty dogs from entering our great country and eating my food. I haven’t made up my mind.

Speaking of dark horse, it may seem odd to envision me as your nation’s commander in chief, a black and white cat. But it would not be the first time someone who was half black – half white was president. And like Obama, I look great in my tuxedo.

In early polling, my favorables look way higher than Trump’s. In fact, in an informal poll including my human, his wife and their two of their friends, 75% of respondents prefer me over Trump. The other person polled is an idiot. 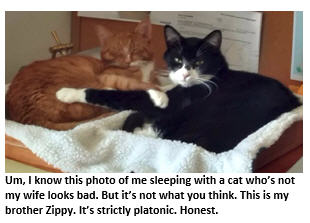 When I become your president, I will open up this country to kitties of all ethnicities: Calico, Tabby, Tortoise Shell, Siamese, even Maine Coon. Felines from all over the world will find a home here. But if you’re a dog, you might want to apply for asylum in the Republic of Barkistan, because canines will not be welcome in a Buddy Administration. Dogs are stupid. Dogs are smelly. Tough talk I know, but the last time I checked, dogs still can’t vote. So, suck it, Fido.

I have not yet decided who my running mate will be. Perhaps Tom Hanks, because, well, who doesn’t love Tom Hanks? Or maybe Taylor Swift, because I heard she loves cats, and she could pull in the younger demographic.

By the way, there is no truth to the rumor that my idiot brother Zippy is thinking about running as well. Even if he does, I’m way more qualified than he is. Zippy still chases a laser pointer. I don’t think you want someone who is that easily duped to have his paws on the nuclear launch codes.

I’m asking for your vote in 2020. With your help, I will Make America PURRFECT Again! – Buddy the Cat.