Rumor has it I may be the next Pope 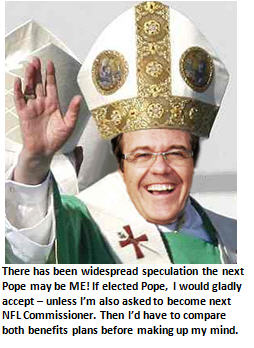 Recently the world’s one billion-plus Catholics were stunned by the news that, for the first time in almost 600 years, a living Pope has decided to step down. The 85-year-old Pope Benedict XVI recently announced his plans to resign on February 28, citing poor health and depression over scores of snarky comments his Facebook page has received lately about his red leather Prada shoes (most critics sniping that he should have gone with Gucci, an Italian brand).

Rumors are swirling about who will be selected as the next Pope. Las Vegas odds makers say the three front runners are:

Most of the mainstream press has completely overlooked a rather unexpected name which is being floated for consideration: Mine. Okay, so most of those rumors have been floated by yours truly. But even a cursory review of my qualifications makes me the obvious choice as God’s representative on Earth.

First of all, my name, Tim Jones, is much easier to pronounce than any of those other candidates I just listed. But that’s not all. Check out my impeccable credentials:

I’ll admit there may be a few obstacles in my way if I am going to get the College of Cardinals to pick me as the next Vicar of Christ. For starters, there’s that minor issue that I was raised Presbyterian.  And if they dig deeply, they may uncover the fact that I’m married, with two kids, and I once got a speeding ticket for doing 45 in a 35 mph zone. But I’m confident I can explain away these missteps as youthful indiscretions on my journey towards redemption. And the grey hairs in the College of Cardinals are suckers for a redemption story, or so I’m told. They’re big fans of the Rocky movies.

I am not sure, however, how I will be able to explain away my disco infatuation in my early twenties, when I became obsessed with the sound track from Saturday Night Fever. If they ask you about this, please pretend you don’t know anything about it. 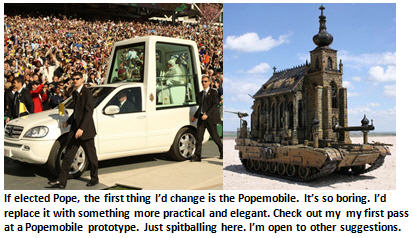 If elected Pope, I plan to make a few changes. First of all, that ridiculous rule about having to eat fish on Fridays? Changing that to a cheese burger and fries. And why require the elderly to make the arduous journey to church to sit in a cramped confessional? If elected, I will insist the elderly simply text in their confessions.

And like the outgoing Pope, the Popemobile needs a serious facelift. I will replace that boxy car with something more contemporary, with a wicked stereo system and built-in flat screen that gets HBO, so I can watch Game of Thrones whenever I want – oh, and a wet bar and a disco ball.

Of course, when I’m elected, my first order of business will be to pick a new papal name – which is not to be confused with my PayPal name, which is DiscoDude58. The obvious choice would be Pope Timothy. But there have already been three Pope Timothy’s. I hate being a copycat. I’m a huge fan of the Beatles, so I was thinking perhaps Pope John or Pope Paul or even Pope John Paul, but I was just told that all of those have been taken. So I’m leaning towards Pope Ringo. I’m pretty sure that name’s still available.

My election as your next Pope is starting to build momentum. But it’s by no means a red Prada shoe-in. Please help my campaign to get me elected. Visit my Facebook page and

my new Pope Picture. If I get 400 million likes, I believe that should put me over the top. But don’t do it for me. Do it for God. I’m pretty sure it’s what he or she would want. God bless you, child. Go in peace.

That’s the view from the bleachers. Perhaps I’m off base. Or as I may soon be saying, Visum est de harena sedes. Forsitan ego non est vera.

. And if I end up getting elected Pope, I will remember who shared this post and who blew it off. I could be a rather vindictive pope, so don’t disappoint me.