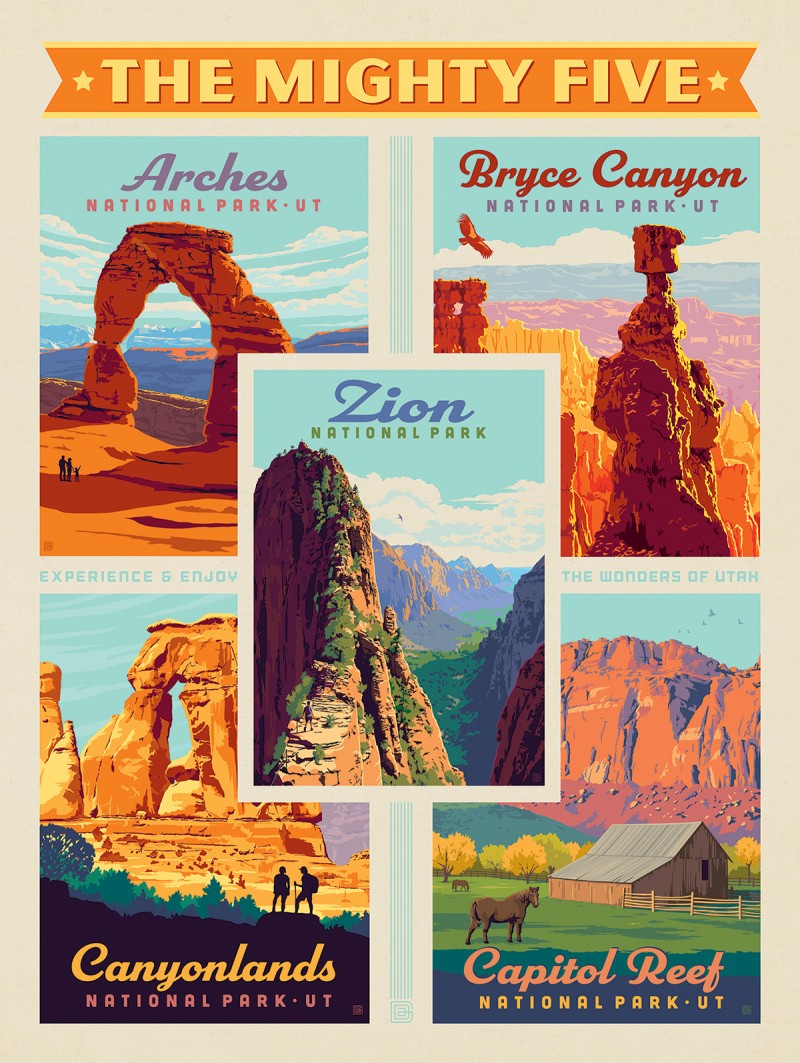 I don’t want to sound negative, but my recent two-week vacation visiting all five of Utah’s national parks was, well, disappointing. I was utterly unimpressed. Utah contains five national parks that they call The Mighty Five: Arches, Canyonlands, Capitol Reef, Bryce Canyon and Zion – or as I prefer to call them, The Forget ‘Em Five.

My wife and I went with two other very nice couples. They all seemed to have a great time. But I can only conclude that it’s because they never get out much. What sad, pathetic lives they must lead. I sure hope they’re not subscribers to this blog.

Here’s what we did: We hiked – I mean, EVERY SINGLE DAY – for hours at a time. Every day, out of the hotel by 7:30am to start trudging over rocks and in between trees, in search of well, rocks and trees.

Over the course of a three-hour hike, one gets a bit parched. And yet not a single one of the “Mighty Five” had a Starbucks – I know this for a fact, because I asked hikers coming from the other direction “How far to the Starbucks” and every one of them looked at me like I was deranged.

Here is my takeaway review of the five national parks:

Arches National Park: If you like reddish-brown rocks and a handful of crumbling arches, then you’ve come to the right place. But seriously, you might want to see a doctor first, because, what’s wrong with you? And the arches are not even that good – with several of them revealing large chunks where part of the arch has given way. And they don’t even let you jump on them or ride your scooter across them.

Canyonlands National Park: Lots more of those reddish-brown rocks, which my artiste wife was constantly correcting me by saying “they’re actually the color of burnt sienna.” Thanks, sweetie. This place also has no shortage of rather large crevices, which once again my wife constantly pointed out were more appropriately known as “canyons.” Whatever. Same difference.

If you like seeing a giant hole in the ground, then be sure to check out… The GRAND CANYON INSTEAD. Because, honestly, this place totally copies the Grand Canyon. The Grand Canyon that we know of today was formed roughly seventy million years ago – a full ten million years before the formation of Utah’s Canyonlands. So, they had TEN MILLION years to come up with something unique and different. But no, they just had to plagiarize another national park. Talk about mailing it in.

Capitol Reef National Park: If you’d like to visit a landscape that feels like the surface of Mars, but with Big Horn Sheep, this park might be to your liking. But if you ask me, don’t waste your time – unless you have a Big Horn Sheep fetish, in which case, I don’t want to know about it. 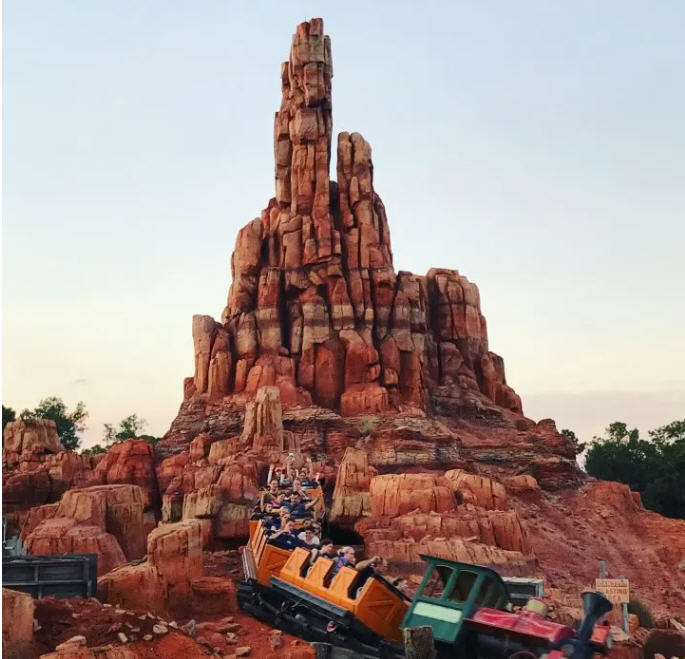 Thinking of going to Canyonland, Arches or Bryce? Save your money and go to Disney World instead. Take the Big Thunder Mountain Railroad ride (seen here). The scenery is the same, plus your train goes through a splash zone. A much better value.

Oh sure, Capitol Ree’s environs look other-worldly, much like Mars. But I saw the Matt Damon movie, The Martian three times, so I think I know what the surface of Mars looks like. (It looks like Capitol Reef.) So, this park is just copying the look and feel of that movie. I hope Matt Damon sues you for millions.

Bryce Canyon National Park: This park is filled with a unique rock formation called “Hoodoos.” The hoodoos all had the same color: Orange. Bright flaming orange. Here’s an idea – why not try adding ANY OTHER COLOR BESIDES ORANGE? Perhaps a pinch of purple or mauve?

The rock formations reminded me of the Terra Cotta Army of Xi’an, China. Only the Xi’an exhibit has far more places to sit down and signs explaining what you’re looking at. My advice? Check out the China exhibit instead.

Zion National Park: This was the last of the five parks we saw. Like the other four, this place was another one-trick pony, with canyons, switchback trails, and crumbling rock formations. (Okay, so technically, that would make it a three-trick pony.)

The food selection at Zion, like most of the parks, was extremely limited. All it offered were Big Horn Sheep, Mule Deer, and chipmunks – which you have to kill and prepare yourself. And let me tell you, the chipmunks were disappointingly gamey.

There, I just saved you five thousand dollars in airfare, hotels, meals, and Smokey the Bear stuffed animals for your kids. No need to thank me.

In all of these parks, which range in altitude from 4,000 to 8,000 feet – the trails all have two things in common: First, they often are right at the edge of a daunting sheer cliff with a 2,000 footdrop-off straight down. And second, there are virtually no railings anywhere. Apparently the National Park Service has concluded that if someone’s enough of an idiot to take a selfie perched on the ledge of one of their precarious cliffs, they deserve what’s coming to them.

When the group wanted a break from hiking – which for me was after about 15 minutes – we took some side trips to investigate dinosaur tracks and pictographs. The dinosaur tracks turned out to be giant paw prints left from some 65 to 125 million years ago. If you looked really closely, you could almost make out ambiguous blobular impressions in the rock that looked nothing like dinosaur prints. What am I missing here? The high point of my dinosaur tracks exploration was when our rental car got stuck in the mud, and I had to push us out. So, yeah, I guess that’s a story I can embellish and tell my grandkids someday about how I save our car and its five passengers from sliding off a 2,000 foot cliff.

Pictographs are ancient paintings in the rock made between 1,000 and 2,000 years ago. Most of the ones we saw looked like space aliens or antelopes painted in reddish brown, I mean burnt sienna, on the sides of cliffs. If you ask me, these drawings are basically just primitive graffiti. Those ancients really had a good PR machine, I guess. 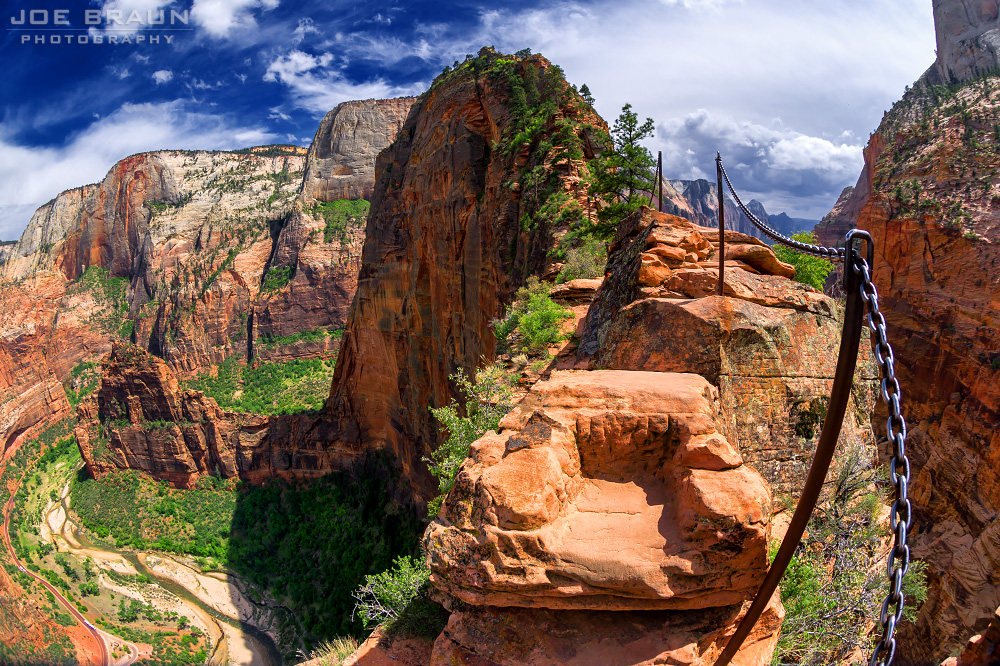 Zion has one cool trail called Angel’s Canyon, which is so treacherous that every year a couple of idiot hikers fall off the cliffside trail to their death. So, I have to give Zion style points for that. Pretty intense.

I don’t get the whole national parks allure. I guess if you’re into meandering through some of the most stunning scenery you’ll ever find on our planet, then sure, go ahead and check out Utah’s national parks. But it’s just not my sort of thing. That’s because there are no benches for resting, very few signs, and good luck finding an espresso bar – or even a snack machine – anywhere along the trail.

I’d have to say my favorite place we hiked during our tour of Utah’s national parks was our final night – when we reached Vegas. There Michele and I made one final trek – down the famous Vegas Strip to see the Bellagio’s towering fountains, as we listened to them roar to the sound of classical music. Ah, so mesmerizing – and not a canyon or ancient volcano to be seen. The volcano’s two doors down at the Mirage.