Announcing My Candidacy for President of the United States 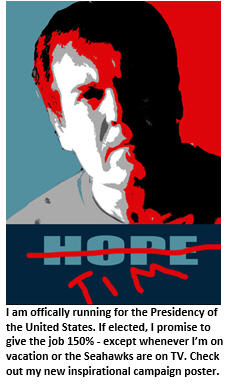 For months now I’ve been watching all of the presidential debates, and I’ve heard some pretty incredible promises by the 16 serious candidates running for president (17 if you include Donald Trump). I have to say: They are really good at making outrageous promises and telling lies. And then it hit me: So am I! I do this every week here in this blog. Which is why I feel there is room for one more candidate in this year’s presidential election: ME!

Naturally, this raises a number of questions, such as:

All perfectly reasonable questions – all of which I plan to deflect by answering a completely different question from the ones posed above, further establishing my credentials as a legitimate presidential candidate. For example:

Question: How would you solve the problem of funding Social Security so that it does not run out in my lifetime?

Answer: The stability of our Social Security system is of paramount importance. America’s greatness is built on the backs of its citizens, who have worked hard and paid into Social Security for years. And it is these people who have made this nation the great nation it is today. That’s why we need to protect our rivers, lakes and air from pollution – for our children and our grandchildren. After all, if our kids can’t swim in a lake without the fear of being attacked by terrorists, then how will we ever stop China from hacking into our electrical grid? I for one won’t stand for it. And that’s why I’m running to be your next president. God bless America.

Question: What are you credentials to be our next president?

Answer: I can see that the moderator has only given me 30 seconds to respond to this question, so let me be direct. Did I mention God bless America yet? I did? Okay, well then, let me address this very important question about my qualifications to lead the highest office in this country. The second amendment is something we must not take for granted. And there is no greater nation in the world than the United States. It is for this reason that – Oh, I see my time is up. Next question, please.

So, I am hereby officially launching my campaign to become your next president. And I pledge to you, my fellow Americans, that MY promises are way bigger than any other candidates’.

MY PROMISE TO THE AMERICAN PEOPLE

If you elect me to become your next Imperial Overlord, er, I mean President, I promise by the end of my first term to eliminate poverty, solve the Middle East conflict, and put a man on Mars (specifically, Donald Trump).

I further pledge to increase our military spending by 50% – unless you’re one of those people adamantly opposed to increasing our military spending, in which case, I also promise to slash military spending by 50%. I will overhaul our healthcare system so that everybody is going to love it – but I can’t tell you how I plan to do it just yet, because that would spoil the surprise. I will also eradicate bullying in every middle school in America, with the possible exception of New Jersey. Those kids are incorrigible.

Here is why I am the better candidate on every key issue in this presidential campaign:

Education: Bernie Sanders promises that if elected, he’ll make a four-year college education free for every American. That’s nothing. If you make me your next president, I promise that and more. I’ll make sure your child graduates with a 4.0 grade point and receives a $100,000/year job offer upon graduation. 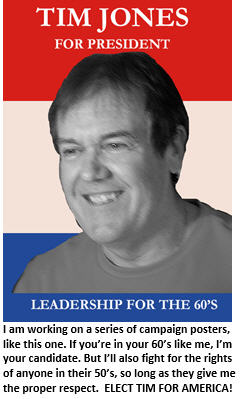 Immigration Reform: Donald Trump promises to build a twenty-foot wall on the USA-Mexican border and to make the Mexican government pay for it. Big deal. If elected, I’ll build a giant dome covering the entire United States of America (think New Orleans’ Superdome but way, way bigger). And I’ll get Donald Trump to pay for it.

The War on Terror: Ted Cruz has said that if elected, he will defeat ISIS in 90 days and “bomb them back to the stone age.” He would also not let in any Muslim immigrants. If you vote for me, I promise to defeat ISIS by halftime in next year’s Super Bowl without any boots on the ground. (I’ll use drones that know how to drop bombs only on the bad guys). And I won’t allow any foreigners into the USA who I don’t feel comfortable with babysitting my kids or mowing my lawn.

Climate Change: Hillary Clinton promises to dramatically expand the deployment of renewable power by installing a half billion solar panels across the country. My plan is way bolder. I’ll install miniature golf courses on every lawn in America – each one with its own windmill. Not only will it generate something like a gazillion gigawatts of power, it’ll also improve the putting skills of millions of golfers.

The Economy: Marco Rubio promises to jumpstart the American economy by slashing corporate tax rates on business, claiming that his plan will grow the economy by 15%. Nice try, Marco, but I promise to do far more for America. If you elect me, my second order of business – right after ordering a kick-ass 30-foot wide high Def flat screen TV with surround sound for my oval office – will be to slash taxes by 150% and create 30 million new jobs (because we will need millions of people to build all those windmills for people’s front lawns).

I can’t promise you that I’ll be able to solve all of America’s ills in the first year of my three terms in office. But let’s just say, I think YOU would make an EXCELLENT Secretary of State in my Cabinet.

In the end, you have a clear choice. You can vote for one of the other lame candidates who only promise to make America “great again”. Or you can vote for me and make America Super Duper Fantabulous again – oh, and win your very own brand new 2016 Ford Mustang – with racing stripes – made right here in the USA. The choice is yours, America.