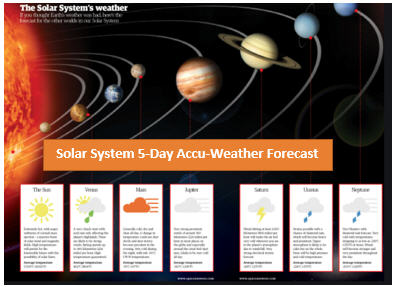 The five-day accu-weather forecast calls for sunny and seasonably hot weather – on the surface of the sun. Temps are forecast to be somewhat cooler as you head further away from the sun. Going to Neptune? Bring a winter coat.

And now for the latest five-day Accu-Weather Solar System Forecast, we turn to our Cosmological Prognosticator, Venus-Ann Mars. Venus, I hope you have another sunny forecast in store for us.

Thanks, Brad. A lot happening in this portion of the Milky Way galaxy for a Thursday. So let’s get started.

Today’s weather on Mercury – I use the word “weather” loosely, since technically Mercury has no atmosphere – calls for intense radiation and scattered plasma tornadoes. Lows will be – 275 F with an expected high topping out around + 840 degrees. That may be a bit toasty for fans of planet Earth, but for Mercury, that’s actually quite seasonal for wintertime.

Mercury’s two sunset times today are expected to be somewhat later than yesterday, but at this time of year, expect the retrograde motion of the Sun between them to remain the same. And sunset on Mercury is incredible, with the sun appearing two and a half times larger in the sky than seen on Earth. But if you want to catch both sunsets, be patient, as the Mercurian day lasts 58.6 earth days.

As is typical for this portion of its orbital journey, Venus maintains its consistent and perpetual cloud cover with a somewhat uncomfortable high of 870 degrees F and a low of, well, 870 F. And for the next 24 hours, if you’re anywhere near Venus’ equator, I suggest staying indoors unless you absolutely have to go out. That’s because there’s a storm watch for this evening calling for scattered showers of sulfuric acid. Atmospheric pressure stands at 1,350 psi – so, be sure your Venetian vacation venue is adequately pressurized, to avoid being pulverized within seconds from the bone-splitting pressure.

Another reason you might not want to venture outdoors this week on the Venetian surface is due to another expected spike in greenhouse emissions caused by larger than normal levels of CO2 trapped in the planet’s thick atmosphere. And thanks to global temperatures consistently in excess of 800 degrees F, it looks like any remaining liquid on the oceans will be completely boiled off again – for the 4 billionth year in a row. So, if you were looking for oceanfront property on the “Morning Star” planet, my advice is to hold off for another millennium or two.

Turning our telescope to Mars, I’m calling for equatorial highs to reach an unseasonably comfortable 80 F tomorrow. But before you start packing your bathing suit, I should warn you, the lows on the red planet will drop to – 200 F degrees. So, also pack a few layers of yak skin fur coats, just to be safe. And, if you suffer from asthma, you might want to stay indoors because there is a planetary dust storm watch in effect as well.

Looking at the big guy in our solar system, Jupiter once again is experiencing back-to-back hurricanes. A level 9.9 lightning alert has been issued by NASA. Be sure to avoid lower elevations, by which I mean anything near the core of this gaseous giant, as temps are expected to reach 43,000 F degrees. Intense radio emissions will continue at northern latitudes. In fact, radiation in general this time of year is 1,800 times that of the Earth, so, before you head out on a day trip exploring the Jovian planet, you might want to pack some extra Jupiter Screen. I recommend a protection level of 500 or greater.

A special advisory has been issued for Jupiter’s moon Europa. It appears that water geysers have been detected in its southern hemisphere. Divers are advised to remain 500 miles away from these zones, as the tumultuous currents could result in being ejected into deep space. That would be a horrible way to end your European vacation, eh, Brad?

If your travel plans call for a trip to the Ringed Planet, a reminder to avoid attempting to go for a stroll while visiting Saturn. If you tried to walk on its gaseous surface, you’d literally begin a long, perilous descent into the planet, experiencing unpleasantly lethal high temperatures and body-compacting pressures until you were crushed to the size of a walnut as you approached the planet’s core.

If you have a hankering to explore the outer boundaries of our solar system, Uranus or Neptune, be sure to take along a few books because travel time to Uranus, given current space travel technology, is estimated at three years. And during your stop-over on Neptune, eliminate its Great Dark Spot from your tour itinerary. That’s because the Great Dark Spot, which is the size of Earth, is expecting wind gusts topping out at over 700 mph by Thursday. That would be a new wind speed record for planets in our solar system. Good luck holding onto your hat – or surviving. 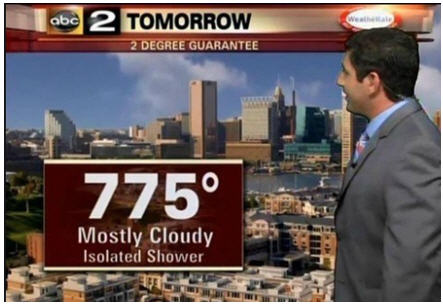 Here’s a quick look at our forecast for Venus. Same old, same old. Hot and very humid with a chance of late afternoon lava showers.

And if you’re one of those people who still believes Pluto is a planet, I’m pleased to report that spring should arrive on the dwarf planet in just under 60 years, which should give you plenty of time to work out your travel arrangements and update your will.

For you adventure seekers, just a friendly reminder that the methane lakes on Saturn’s moon Titan offer a unique choice for boaters, if you don’t mind the devastatingly toxic fumes. Don’t forget to pack your chemical safety goggles, face shield and CM-7M Military Grade gas mask, before you leave shore.

Just a few other weather reminders. The view of the Sun on Neptune’s moon Triton is expected to be obscured in southern latitudes by the dust and gas geyser. And if you’re planning a pleasure trip to the Mars’ polar ice caps, remember that radiation suits are now mandatory when you’re not confined to a NASA-approved hermetically sealed facility.

Finally, don’t forget about tomorrow’s lunar eclipse on Jupiter’s moon Ganymede. Should be quite the sight to see – if you happen to be anywhere near the surface of Jupiter. Unfortunately for me, I’ll still be stuck in Seattle traffic, so I’m afraid I’ll miss it.

That’s it for the weather. Now back to planet earth and Lenny Johnson for sports. Hey, Lenny, are my Seattle Mariners going to have a decent bullpen this year?

This week’s post was conceived by and co-written with my good friend William Maxwell, a serious astronomy buff who does astronomical photography and writes about celestial phenomena for various publications. You can check out William’s astro images at www.astrobin.com/users/WilliamM.