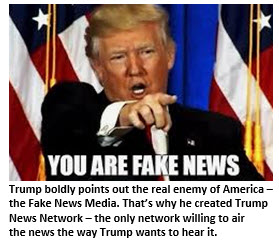 The midterms are over, and President Trump is basking in the glow of a historic Republican triumph. The Democrats were trounced in almost every congressional election (if you don’t count the lone exception of the House of Representatives). “We would have won every single House and Senate contest if it weren’t for massive voter fraud perpetrated by Democrats everywhere,” said the President. “In fact, the Democrats blatantly attempted to steal some races by forcing the polling stations to count all the votes. This is an outrage,” he added.

It’s official. In a poll of blue-collar women with a 4th grade education who think Jews are the problem, 65% said Trump was the best president for women ever. “What can I say,” said a clearly pleased Trump. “Women love me. And I love the ladies – so long as they’re at least an 8, of course.”

In a related poll, taken by the TNN (Trump News Network), more blacks admire President Trump than any other president since Barack Obama. When asked why he is so loved by people of color, Mr. Trump humbly reflected, “I’m the least racist person you’ll ever meet. Negroes love me. Just ask Kanye.”

The Fight to Keep our Southern Borders Safe

Pentagon officials have confirmed the president’s marching orders to send 500,000 troops to the Mexican border over the next two weeks, admitting that it will mean diverting all remaining troops from the Middle East and South Korea. “You have to send our fighting men where the threat’s the greatest,” said history’s greatest military genius.

TNN has confirmed that the maniacal horde is already less than 1,200 miles from an imminent invasion. Based on rough estimates the President made while playing Candy Crush, if the Honduran terrorist caravan averages 100 miles a day on foot, they’ll reach our borders by Thanksgiving. By then, the US military should have the nuclear warheads in position. “Who knows what kinds of deadly weapons those 13-year-old girls might have stuffed in their Hello Kitty back packs? And a rock could poke someone’s eye out!” the president warned.

According to administration sources, spy planes have identified some of the vilest criminals among their ranks, including George Soros, the 2018 Super Bowl-winning Philadelphia Eagles who snubbed the president’s invitation to the White House, and Rosie O’Donnell. “They must be stopped, especially Rosie,” Trump tweeted.

Thanks to President Trump’s courageous concern for the safety of our nation’s fearful white citizens, our southern borders are at long last secure. “Next up will be a wall to protect our Eastern border,” said the Commander-in-Chief. 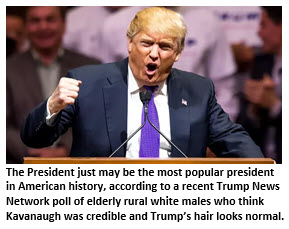 TNN reports that President Trump resolved to fire Attorney General Jeff Sessions because “Dang nab it! He’s done a terrible job!”  Sessions’ intention to recuse himself was a minor factor in Trump’s decision, adding that what really forced the president’s hand was the AG’s annoying hillbilly accent, which drove #45 crazy.

Sessions’ replacement is his former chief of staff, Matt Whitaker, who agrees with Trump that the Mueller investigation is, of course, a witch hunt. This move was met with approval by 95% of America-loving Americans, according to a TNN survey of people who only watch TNN and don’t get out much. Trump’s bold decision inspired hundreds of thousands to hold impromptu celebratory marches to praise the constitutionality of the president’s move. Their numbers far outstripped the Women’s Marches “which were photo-shopped – duh!” quipped the presidential Trump.

Kids Having A Barrel of Fun in Texas Camps

Make that a “cage of fun.” TNN reports that the Trump administration’s extremely well-thought-out plan to separate young children from their selfish asylum-seeking parents and place them into luxurious cage camps is a huge success. “These kids are having a blast. They get two meals a day – three if they can ask for food in American. What more could a kid want?” exalted Trump, whose brainchild was this funplex.

The Hunt for Hillary’s Emails

TNN reports that Justice Department officials are zeroing in on those 30,000 lost Hillary emails. A department spokesman stated, “We spotted something suspicious in a blue Chevy van with West Virginia plates, heading westbound near Chattanooga, TN.” Confident of finally proving once and for all that Crooked Hillary is really the one who colluded with the Russians, Trump tweeted, “I will LOCK HER UP by Christmas. #MAGA.”

Trump’s Plan to Save Healthcare

In a daring move to prevent the Democrats’ relentless efforts to take away the healthcare of every American, President Trump announced that he has a plan to save healthcare and make it great again. “It will be the most beautiful, amazing plan ever. And the cheapest. You won’t believe it.” He went on to add that so long as nobody ever gets sick, they will love this plan.

According to TNN sources, President Trump is the hardest working president in modern history. He often can be found sauntering into the Oval Office before 11am and staying until well past 4:15pm. While some have criticized the president for his occasional golf vacations, TNN fact-checkers calculate that Trump, in his first two years, has spent fewer days golfing than all the presidents of the past 100 years combined have hit the links. 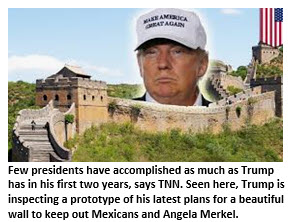 The President’s Schedule for Today

This will be followed by hitting golf balls off the White House balcony, then wrapping up with a 5pm dinner over KFC with TNN news anchor Sean Hannity to discuss the president’s plans to prosecute Bob Mueller and every Democratic member of Congress for Russian collusion and being so mean to him.

Those are the latest headlines from the Trump News Network, the #1 news source for poorly educated, low information voters and white guys afraid that Obama is still coming to take away their guns.