Lindsay Lohan is NOT a milkaholic! 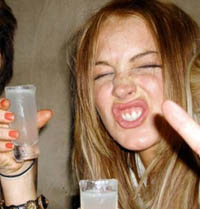 Did you happen to catch the mean-spirited Super Bowl ad by those bastards at E*Trade making fun of poor Lindsay Lohan? You know the one. It features a toddler boy talking on the phone with his toddler girlfriend who gives him grief for not calling her the night before. The girlfriend, suspicious of his behavior, confronts him and asks “And that milkaholic Lindsay wasn’t over?” just as another baby girl appears onscreen saying, “Milk-a-whaaat?” Here is the ad.

Well, hello! Could it be any more obvious this was a direct, mean-spirited frontal assault on the reputation of the quiet, publicity-shy mega-star? Of course not. So the 23-year old celebrity actress did what any average private citizen who owns five houses, a lear jet and their own line of fashion footwear  would do when an ad mentions someone who shares their first name – she sued ‘em. Yes, she filed a totally justified lawsuit against those insensitive jerks at E*Trade for their blatant efforts to defame her in this commercial. Can you blame her? It’s obviously a direct character assassination, poking cruel fun at all the past media hype about her personal struggles with addiction to alcohol and cocaine and pain killers and stimulants and cough syrup and nasal spray and cosmetic surgery and changing her hair color and going to night clubs without wearing any underwear and … (Editor’s note: the preceding passage has been abridged due to space limitations.)

To be honest, when I first saw the E*Trade spot, I’m embarrassed to admit I didn’t actually notice that it was a reference to Lindsay Lohan. But now that she has filed this lawsuit and every radio and television station has picked up the story – thanks mainly to her press release announcing the lawsuit – I can’t help but associate the name in the ad with this super star. I for one am grateful that Ms. Lohan brought this sordid issue to my attention. For without her press release and accompanying full page ad in the Hollywood Reporter, I might never have made the connection between her and the ad. 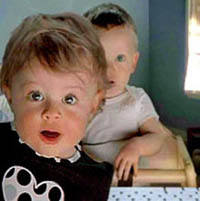 And don’t tell me that when you heard the ad say “that milkaholic Lindsay” that you didn’t immediately think of Lindsay Lohan. I did my own “man on the street” survey of more than 100 people, playing them the spot and asking which famous celebrity they immediately thought of when they heard the name Lindsay in the ad. And the pattern of responses was consistent. Over and over people told me the same thing: “um, er, I have no idea. Why do you ask? And please stop playing with my hair…” But when I went on to mention “How about Lindsay Lohan?” about a third of them said, “Lindsay Who?” But the other two thirds said, “Oh yeah, right. Her. What about her?” My scientific survey proves conclusively that when Americans are shown a TV spot with a toddler named Lindsay and you ask them if they have ever heard of Lindsay Lohan, two thirds of them say, yes they have! Well if that’s not grounds for a lawsuit, I don’t know what is.

Ours is a celebrity-worshiping culture. And I’m all for it, I might add. There are only a small handful of celebrities who are so famous that they’re known by just their first name. That list includes icons like Madonna, Cher, Prince, Oprah, Sting, Judge Judy, Miss Piggy and of course, Lindsay… Lohan… the child star actress, remember? From The Parent Trap? Right, that Lindsay … Lohan. 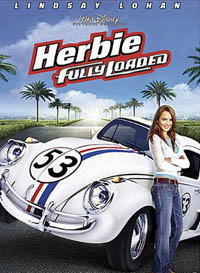 I for one applaud her brave, selfless decision to take prompt legal action to redress her legitimate grievance by demanding a mere $100 million in damages for emotional pain and suffering. (That barely covers her annual bar tab at her monthly spa vacations along the Cote D’Azur.) After Pamela Anderson and Miley Cyrus, most discerning movie goers consider Ms. Lohan to be one of America’s (30,000 – give or take) most talented actors. And you need look no further than her long list of illustrious Oscar-snubbed performances to understand why. It is hard to say which of her many classic film roles is most memorable, Confessions of a Teenage Drama Queen, Mean Girls, Just My Luck, Freaky Friday (the remake), or my personal favorite, Herbie Fully Loaded.

One thing’s for sure: these movies showcase Lindsay Lohan’s almost chameleon-like wide-ranging talent. Whether she is playing a mean teenage rich bitch or a young, self-indulged narcissistic debutante or an image-obsessed, spoiled upper class material girl, she completely becomes the character. If you ask me, it’s just a shame that hack amateur Merryl Streep nosed her out for the role of Julia Child in last year’s Julie & Julia, a role Lohan was destined to play. 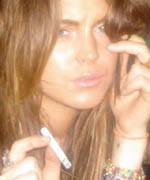 Now let me be perfectly clear. Lindsay Lohan is no milkaholic – at least I am moderately certain of this. (Of course I have been wrong occasionally. I was shocked at the revelations that Home Run King Barry Bonds had taken performance-enhancing drugs. I never saw that one coming.)

How dare E*Trade imply that Lindsay Lohan has a milk problem. I am furious at E*Trade – and I assure you, it has nothing to do with the fact that I signed up for an online day-trading account with them last month and lost $10,000 in my first 40 minutes of trading. Seems I kept pressing the BUY ON MARGIN button when I thought I was pressing SPELL CHECK. But that has nothing to do with the stand I am taking today. I just care deeply about preserving the reputation of Ms. Lohan. Yes, it’s true for years she has battled with various types of substance abuse, from cigarettes to diet supplements to helium-filled party balloons to Listerine to catnip to … (Editor’s note: Enough. We get the point. Move on.) But milk is not one of those substances.

And what if it turns out that Ms. Lohan is a milkaholic – not that I am suggesting even for one minute that she might be. Being a milkaholic is no laughing matter. Every year thousands of toddlers endure the agony of this largely misunderstood (nonexistent) health disorder. It starts innocently enough, as the infant clings to mommy’s breast a bit longer than normal. Then before you know it, they start drinking right from the milk carton. After awhile, unsuspecting mothers start to wonder why the family is going through milk so quickly. Eventually the effects of the addiction become unmistakable. When there’s no more milk, they migrate over to other dairy products. Before you know it, the toddler starts taking hits of yogurt or whipped cream and eventually, as they spiral out of control, even cottage cheese. (Yuck!) By the time they start rifling through the non-dairy creamers, it’s too late.

So in a way, Lindsay Lohan is doing a noble public service by finally shining a light on the until-now rarely talked about childhood affliction of milkaholism. On a personal note, I almost became a Chocolate Milkaholic at my summer Bible camp at age 9. It was only through my mother’s courageous tough love and my chocolate milk detox “patch” that I eventually won my battle. (I am currently addicted to Mountain Dew and Pringles, but I am in treatment. Please pray for me.)

I hope Ms. Lohan gets the justice she so richly de$erve$. Yes her battles with addiction to drugs and alcohol and Prada shoes and Gucci purses and stretch limousines and Mediterranean topless beaches and French kissing Madonna and making really sucky movies and … (Editor’s note: Just stop it. It’s really starting to piss us off.) are widely known. She has had more stints in celebrity rehab than there are Elvis impersonators in Vegas. But this is no basis to impugn her otherwise sterling reputation by intimating she is battling a milk addiction too. That just crosses the line.My heart aches for you, Lindsay Lohan. America is rooting for you (with the possible exception of that poser, Meryl Streep).

Oh, by the way, I thought you should know, Ms. Lohan, that I saw another TV commercial this past week, and I have to tell you, I’m pretty sure they were taking another swipe at you. No, the spot didn’t actually mention you by name or show your image. Still, I think the slur was obvious and intentional. It was a Toyota ad featuring their president humbly apologizing for the safety problems of their cars. But you don’t have to work very hard connecting the dots to know he was really saying “Lindsay Lohan is a really bad driver who texts while she drives and changes lanes without signaling.” If I were you, I’d sue the bastards at Toyota for everything they’re worth (and I would only ask for a 10% finder’s fee for bringing this slanderous ad to your attention).

I have to get back to my TIVO. I just fast-forwarded through a commercial by Ortho for their “Weed B Gon” weed killer. It went by really quickly but seems to me they were not so subtly implying that you smoke weed. I will investigate and get back to you.