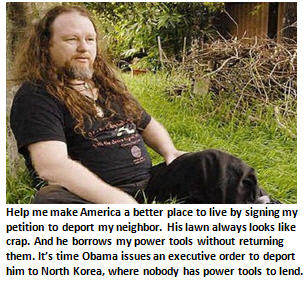 I believe it’s every American’s duty to do their small part to make our country a better place to live. That’s why I’m calling on President Obama to take immediate executive action to DEPORT MY NEIGHBOR BERT ZABLINSKI NOW! Have you seen his lawn? The last time his grass was less than a foot high, dinosaurs roamed the earth. And don’t get me started about his front yard collection of 47 plastic African garden gnomes or his 14-foot tall sculpture of Elvis giving the finger which he made using only Budweiser cans and Cheez Whiz.

Someone has to take action. Why not the President? I discovered this great web site called We the People, which lets you directly petition the White House. It gets over 300 petitions a day, many from people able to construct nearly complete sentences with nouns and verbs.

The We the People Petition-the-White-House web site was launched in September 2011, and has since received more than 142,000 petitions and 9.2 million signatures. The volume of petitions has spiked since Obama’s re-election in November 2012, mostly from disaffected white southerners furious about Obama’s apparent plans to take away everyone’s guns and require us all to convert to Islam. I must have missed that news story.

In recent months, thousands of average Americans – not to mention even more sub-average ones – have been speaking their minds to the White House. They have signed petitions on a wide range of issues critically important to the future of our great democracy. Here is small representative sampling of actual petitions submitted to the We the People web site (and I swear I am not making any of these up):

Admit it. Suddenly my petition to get my neighbor Bert Zablinski deported is starting to sound pretty reasonable by comparison, isn’t it? I have even created my own SUPER PAC to raise money for my cause: VFTB America. I’m thinking it will stand for Victims Fighting to Take Back America. But then again, I’m kind of partial to Vegetarians For Teddy Bears. I can’t decide.

My SUPER PAC will also target other important social issues I that demand President Obama address in his second term. I’m still compiling my list, but here are a few items I plan to include in upcoming petitions:

Please help me make America a better, more tolerant country by signing my petition to deport my neighbor Bert Zablinksi. While you’re signing, could you just make a tiny $100 donation payable to VFTB America? I may not be able to convince the White House to kick my annoying neighbor out of the country, but God willing, I just might collect enough donations to pay off my kids’ college loans. And that’s a start.

.  And while you’re at it, please sign my petition to make this humor blog the official humor blog of the USA. It’s the patriotic thing to do.