My Wife Wants Me Recalled 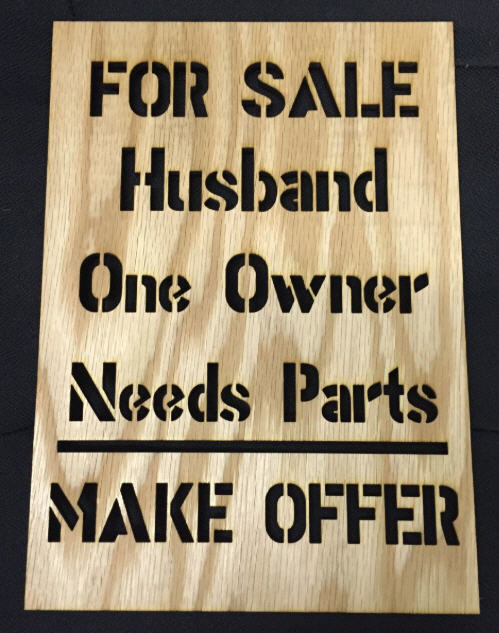 Thank you for your recent letter to Husbands-R-Us regarding your purchase of a husband, specifically the Tim Jones BSE (“Basic Spousal Edition”) in April 1987. In your 12-page diatribe, you demand that we recall this “badly broken down jalopy” (your words) due to, as you put it, “innumerable product defects and previously hidden deficiencies” that you claim were not made known to you when you purchased this unit.

We at Husbands-R-Us appreciate your business, Ms. Jones, and under normal circumstances, we would gladly recall your model and provide you with a satisfactory replacement at no cost. Regrettably, these are not normal circumstances. Our 30-year marital protection plan is unmatched in the industry. Since you purchased your spousal unit in 1987 – over 33 years ago, your husband is now officially out of warranty.

It is not uncommon that the components of a husband of that vintage will start to wear out, which is why we always recommend regular upgrades – advice you did not heed. In fact, not many models last that long, so we don’t carry replacement parts for such old versions.

Even if we could make an exception and let you retroactively buy an extended warranty, it has also come to our attention that you recently took your husband in to get both its knees replaced. Your decision to have these repairs performed by a non-Husbands-R-Us mechanic would void your warranty anyway.

In looking at your account profile, we discovered this is not the first time you’ve filed a complaint regarding your matrimonial purchase. Indeed, you have written us on at least nine prior occasions, including:

January 2007: “I noticed that my husband is losing its finish – especially on the roof. Is there any way to preserve what little protection is still remaining?”

March 2011: “My husband’s motor is making loud grinding noises at nighttime, making it impossible for me to sleep. Can you install a muffler to make it run more quietly?”

October 2015: “This model’s headlights appear to be dimming and have difficulty making out nearby objects in low light. Can these be replaced?”

August 2018: “This piece of crap you sold me routinely leaks gas. And its motor sputters and turns off after very short distances – often stalling out on the couch when I try to steer it towards mowing the lawn.”

And then there were those missives you sent bemoaning its declining performance in bed with each passing year. That’s really not covered by the warranty. Your owner’s manual clearly states, “Your mileage may vary.”

We also appreciate the occasional correspondence from your offspring, arguing that their DAD Model TLP (“Totally Lame Parent”) was “unfair and a loser” for refusing to buy them cell phones when they were seven years old. We got a chuckle over their most recent lament regarding its styling and appearance – “It’s, like, so out of date, we’re, like, awesomely embarrassed to, like, be seen riding around in public with it, like.”

We understand your collective disappointment. Full disclosure, we’ve actually received scores of complaints lodged by other individuals about your particular Tim Jones BSE model – from former bosses, neighbors, and several of its middle school teachers.

Interestingly, most of the grievances were submitted by people who felt harassed by a systemic barrage of weekly sophomoric humor articles they received in what some described as this unit’s “desperate attempt to seek approval.” We have never heard of this glitch before. Apparently, this particular Tim Jones is no laughing matter.

Please understand, when your hubby was originally manufactured back in 1955, husband manufacturing technology was still in its infancy. Back then, the industry simply lacked the quality controls that are commonplace on today’s more intelligently designed, longer-lasting husband models. And the slimmer, sleeker body styles many women prefer would not become the norm until many years later.

Furthermore, please note that your purchase contract clearly specified that we are not liable for damage caused by reckless driving (or eating). The fact that your husband’s engine was routinely fueled by frosted cinnamon pop tarts and Mountain Dew for the last 40 years goes against all the maintenance recommendations found in your service manual.

Still, given you’ve been a longstanding customer, we at Husbands-R-Us would like make a one-time-only offer to compensate for your troubles. We will give you top value for your husband if you trade it in for a newer, more high-performance version. We have a wide selection including an exotic, luxury model just imported from Italy starting at $95,000.00. We estimate the worth of your Tim Jones BSE, based on its age and current condition, to be roughly $50 (we’ll make it $100 if you throw in its 60” flat screen man cave TV). But hurry. This offer expires at midnight.

It can be disheartening to discover one has unwittingly gotten locked into a long-term husband purchase contract with restrictive return policies and onerous payment terms lasting 20, 30 or even 40 years. If that describes you – and based on your voluminous correspondence over the years, it sounds like it might –we recommend you consider our attractive leasing program, BOTS (Boyfriend On The Side). We have an excellent inventory of new models – many with very low mileage and ample sized engines that really go the distance. You can even do a month-to-month lease – and trade them in for new BOTS for a small restocking fee.

Here at Husbands-R-Us, we look forward to serving you again when you’re in the market for a newer, more advanced husband or just to take one of our BOTS out for a test drive.

Or perhaps you’d like to forget about men altogether and buy a shiny red sports car instead. Many wives tell us, compared to their husbands, new cars are far less hassle, much more responsive, smell way better, and come with firmer, sexier rear ends.