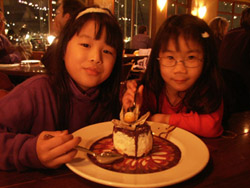 As a parent, you never stop worrying about your kids or how they will turn out. Will they grow up safe? Will they make good choices? Will they ever forgive you for buying them those matching green and orange plaid square dance dresses for their 13th and 14th birthdays? My two teenage daughters, Rachel and Emily (shown at left when they were much younger), are only a two and three years away, respectively, from heading off to college. [Editor’s note: My wife hates when I talk about our kids by name in my blog. Something about respecting their privacy. So for the rest of this blog, the part of Rachel will be played by Vivian. The part of Emily will be played by Nicole.]

The other day, I reflected on all the things I’ve worried about as a parent. I came to a startling realization: I spent much of the past 16 years needlessly worrying – fretting over how to be a better parent, be a positive role model, and keep my kids from making poor choices. In retrospect, I needn’t have been so anxious. I was never going to get it right. I finally realized that my kids were going to make it through this bumpy journey called childhood (moderately unscathed), regardless of my egregious parenting mistakes. In retrospect, I should have spent a lot less time worrying about whether they brushed their teeth and a lot more time about worrying how to cure my slice in golf. Then again, trying to cure my golf slice is about as futile as trying to be the perfect parent. Both end up in bitter disappointment.

Here are nine parenting lessons I wish I hadn’t worried about nearly so much over the past 16 years:

Lesson One: Share your toys. This message never quite sank in. Just last week, I heard Rachel, I mean Vivian, shouting at Emil- er, Nicole: “Stay out of my room. If you touch my computer, you’ll pay.”  Seems the concept of sharing your toys is still as enigmatic for my daughters as the concept of String Theory in quantum physics.  Apparently the act of simply touching any possession – a dress, earrings, hair brush, or lip gloss – by the opposing sister makes the aforementioned item toxically infected and irreparably damaged, and constitutes legitimate grounds for full scale retaliation – usually involving the misappropriation of the enemy sibling’s high school sweatshirt, favorite shoes and Johnny Depp poster.

Lesson Two: Don’t eat junk food. Here’s another life message that didn’t quite take hold. Despite constant conversations about the risk of childhood obesity, heart disease, and the probability that their brain would dissolve into a wad of chocolate chip cookie dough ice cream, our girls never quite internalized the importance of good eating. Fortunately so far at least, neither is overweight – which may explain why my constant harping about proper nutrition never really resonated. Or perhaps it was the fact that I usually still had frosting from a Krispy Kreme glazed donut on my chin during my lecture.

Lesson Three: Don’t watch so much junk television. They say the average American toddler spends more than 32 hours per week watching television.  An A.C. Nielsen study concluded that the average child will have watched more than 8,000 murders on TV before they finish elementary school. I’m proud to say our two kids have done their part to keep these averages up. My girls have watched just about every episode of America’s Next Top Model since 2007 (which, to my knowledge featured almost no murders). As a result, I am confident they are now ready for the challenges of adulthood – just so long as those challenges require sultry walks down a catwalk in 5-inch spiked heels and photo shoots dressed as a lioness, purring provocatively on the hood of a Lamborghini.

Like many concerns of the moment, my worries about watching too much junk TV eventually faded away, as my girls began to waste less time mindlessly watching the boob tube. Now they spend these hours doing something much more constructive: mindlessly sending thought-provoking chat messages like “What’s up? HAHA!” to their 947 closest friends on Facebook – usually sent during 4th period algebra class.

Lesson Four: Do your chores. Yet another parental lecture that seems to have made no impression was my weekly sermon about how we all share the responsibility to keep our home tidy and clean. I came up with all sorts of strategies to get our kids to clean up their rooms and put away their toys, dirty clothes or retainers. I created rewards that incentivized them for doing all their chores on time. But none of them worked. And lest you think I was a push-over and simply let them get away with not doing their chores, I put my foot down. Don’t do your chores and no TV! Oh sure, technically speaking, they still didn’t do their chores most of the time. But they didn’t get to watch any TV either. They had to watch their shows over the Internet on their laptop’s small screen. That’ll teach ‘em.

Lesson Five: Be polite to your sister. For years, our girls used to constantly antagonize each other over the slightest transgression. I am convinced the primary objective was just to piss off their sibling. No issue was too trivial to draw the line in the sand and declare war: Which Disney TV show they were going to watch, who should get the last cookie, or more recently, how “everybody at school knows your boyfriend is totally into Madison over you.”

I am pleased to report that after years of lecturing, cajoling, pleading and periodically blackmailing our kids about the importance of being polite to their sister, I have made modest progress. Recently, Nicole asked Vivian to pass the salt at dinner, and Vivian said, “Get it yourself. I mean, get it yourself, please.” This past summer, there was actually a period of two hours where Vivian and Nicole were in the same room as each other and not a single unkind word was spoken. Okay, so Vivian was taking a nap at the time, but that’s not the point. The point is they were not picking on each other for two whole hours. What silent bliss! I am hopeful that it’s just a matter of time before they get past their differences and become BFFs. Probably about ten years after I’m gone. Much like Don Quixote, I cling to this impossible dream.

… Wait a minute, I just noticed that Vivian and Nicole are actually sitting on the couch right now – and they’re both conscious. And neither one is accusing the other of stealing their blow dryer or being a snot-nosed bi-atch. What’s this? They are laughing and joking? They actually seem to be getting along? Oh, my God.  I have to get this on video. The wife is never going to believe this.