So you think you know Canada, eh? Seven myths about our neighbors to the north 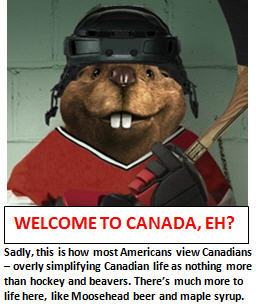 The United States shares a border with its neighbor to the north, Canada, that’s 5,525 miles long – or if you happen to be Canadian, that’s 8,891 kilometers – not that anybody really uses kilometers, mind you.  Did you know that our border with Canada is the longest unprotected border in the world? I’ll bet there are a lot of things you don’t know about our friendly neighbor to the north.

As someone who has been married to a Canadian for 25 years, I am an expert on appreciating the subtle cultural differences between our two nations. I continue to be surprised by how little most Americans know about the great nation of Canada. When asked, What’s the capital of Canada?, 55% of Americans guessed Toronto. Another 25% chose Montreal. And 15% responded, Could you repeat the question? The correct answer, of course, is Moose Jaw, Saskatchewan.

Many Americans think of Canadians as beer-swilling, hockey-playing, toque-headed, parka-wearing moose-hunters, whose favorite food is a beaver tail pastry, covered in maple syrup. In reality, only a small minority of Canadians are moose hunters. Most prefer to hunt caribou. The true picture of Canada is much more nuanced and includes Royal Canadian Mounties officiating curling matches on floating pack ice.

The sad truth is that most Americans know next to nothing about our next-door neighbors to the north. Time to set the record straight. Here are seven widespread myths (only two of which I’ve been spreading) about Canada and Canadians.

Myth #1: Canadians are just like Americans. While it is true that the biggest compliment you can pay a Canadian is to tell them that they’re just like us Americans, the reality is that they are a mysterious lot and oddly different from the typical American. For example, Canada’s murder rate is less than one third that America’s (a paltry 1.6 murders per 100,000 vs. our 5.2) – most likely because Canadians are too busy trying to locate firewood to keep warm to have spare time for killing in-laws and skanky ex-girlfriends.

The USA ranks Number 1 in the percentage of people incarcerated, while Canada lags far behind at an embarrassing 128th. So while Canadians try hard to emulate Americans by attempting to speak our language and eating many of the same breakfast cereals, the truth is they are a freakishly pacifist, law-abiding, well-mannered society compared to America. If America is Homer Simpson, then Canada is Homer’s polite, well-behaving, slightly disapproving next-door neighbor, Ned Flanders. 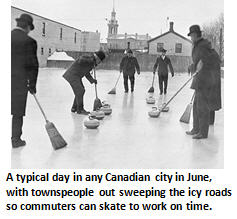 Myth #2: It’s winter in Canada nine months of the year. Don’t believe the hyperbole. Have you ever been to Vancouver? This charming host city to the 2010 Winter Olympics often has more than four months with little more than a dusting of snow on the ground. However, it is true that for much of the country, they don’t see the sun between November 15th and May 3rd.

Myth #3: By law every Canadian male must serve at least two years in the National Hockey League. It is true that Canadiaks love their hockey. But this “law” is simply a myth. Every year there are several thousand young Canadian males who simply do not possess the talent to get drafted to play at the competitive level of the NHL. These males must serve their two years in the CCA (Canadian Curling Association) instead.

Myth #4: Most Canadians live in igloos. Once again, this commonly held belief is wildly off the mark. Most Canadians live in homes remarkably similar to those of Americans. In fact you can hardly tell the difference. (Hint: The Canadian home is the one with the polar bear in the backyard.) It’s only Canada’s federal prisons that are made out of igloos. On a related note, recent studies have shown that prison escapes rise sharply during July and August. Prison officials are currently investigating possible causes. 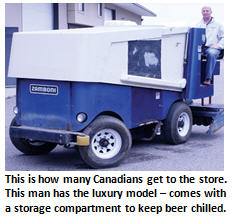 Myth #5: The most popular form of commuter transportation is the Zamboni. Again, simply not true. To most Americans, the Zamboni (seen at right) is that truck on steroids that smoothes out the ice between periods at a hockey game. Admittedly, in many parts of urban Canada, the Zamboni is a popular form of transportation – but mostly just for short trips to the local store. Its horrible gas mileage and lack of a roof make it impractical for most commuters. Most Canadians simply ice skate to work – except for the RCMP, who prefer to go by horseback.

Myth #6: The elderly are left to die alone on ice floes. Yet another gross distortion (although true in Saskatchewan and parts of Labrador). Most Canuckalucks do not leave their elderly out to die alone on ice floes. They always make sure they are accompanied by their trusty sled dogs and are provided a nourishing last meal of a box of Tim Horton donuts, maple syrup, vinegar, and a case of Labatt Blue beer. Canadians are nothing if not civilized.

The truth is there are worlds of difference between Canada and America. They are almost like separate countries. For example, we have states while Canada has provinces. Our temperature is in Fahrenheit. Canada uses some odd, obtuse system called Celsius. We know how to spell words like labor, favorite, neighbor, and theater. Canadians do not.

But there is one thing Americans and Canadians surely can agree on: Both sides would be delighted for Canada to become our 51st state so we can commence drilling for oil in their pristine national parks. America welcomes Canada to join us – but only on the condition you do away with that insufferable dual-language requirement. We simply won’t tolerate that.

That’s the view from the bleachers. Perhaps I’m off base. C’est la vue des gradins. Peut-être je suis de la base. Oh, cut that out!