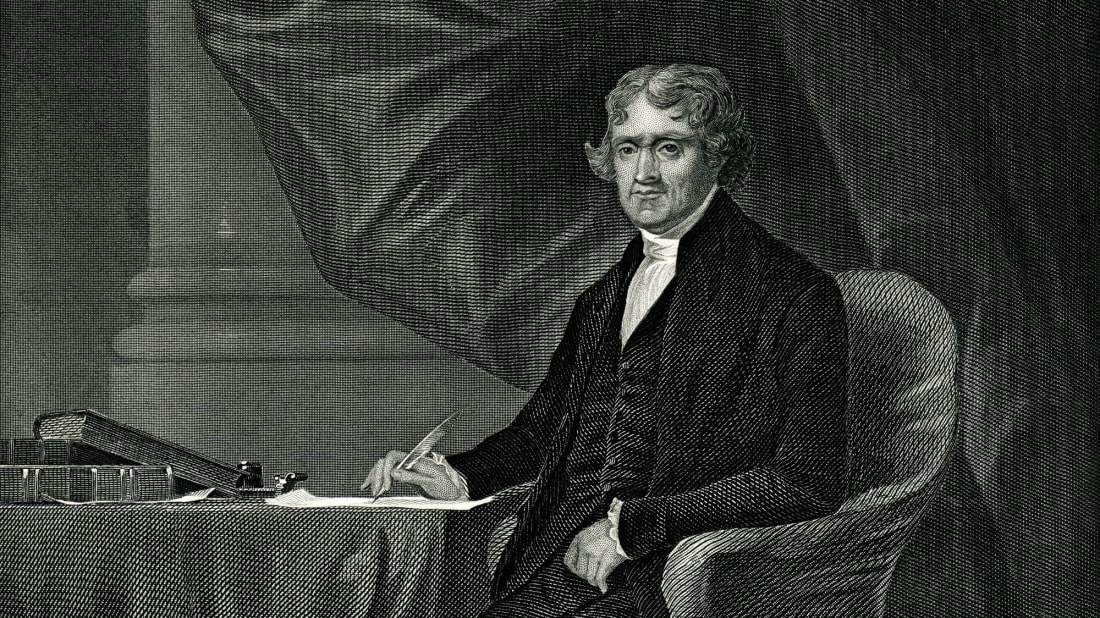 Thomas Jefferson, Author of the Declaration of Independence, third president of the United States, Founder of the University of Virginia, and, unfortunately, the father of a heretofore unknown son named Bradley who’d forever embarrass his dad.

[Note: As a nationally respected historian, I am proud to share never-before-seen correspondence between Thomas Jefferson and his rarely mentioned youngest son, Bradley.

These riveting letters were written between 1786 and 1787, when Jefferson was living in Paris, serving as America’s Ambassador to France. They reveal a side of our third president which few people ever knew. – Tim Jones]

My Dearest Bradley, I miss you, my youngest offspring, more than words can convey. Paris is resplendent. Notwithstanding, I sorely pine for the September leaves of our fair Charlottesville home, Monticello. Know that would that it were up to me, I would be staring upon your youthful countenance at morrow’s dawning. I trust you are faring well as a robust lad of 19 and making the soundest of decisions. Pray tell, how goes thee on this autumnal day?

My Fine Issue, I confess to being modestly disconcerted by the brevity of your rejoinder. Hoping was I that there might be some news of your goings on and the state of affairs at our plantation. I miss you painfully, as I miss our dear bloodhound, Bailey. Do reply anon with an account of your affairs.

Dear Father, I miss Bailey, too.

Dearest Bradley, Your most recent missive – if you can call a four-word tiding a “missive” – left me startled and bereft of joy. Is our faithful Bailey indeed no more? Pray assure me, he is merely on the prowl. Details, my lad. I implore you.

Dear Father, I am as mystified as you. When I returned from prison, Bailey was gone. 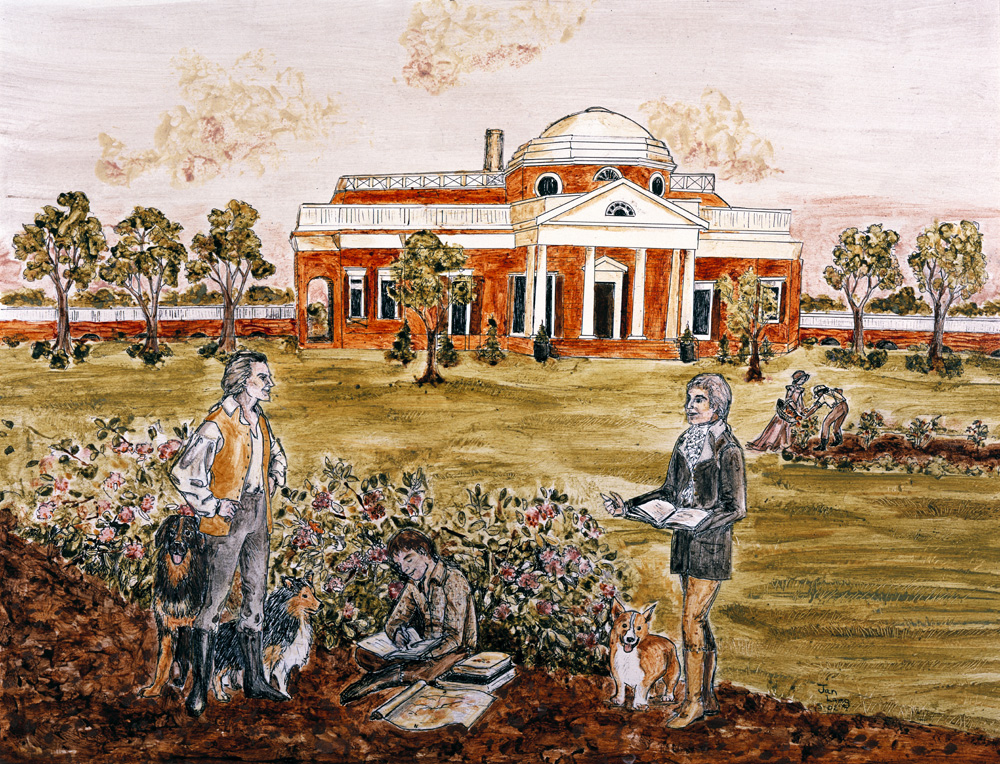 One of many drawings and paintings of Jefferson’s beloved home, Monticello. That’s Jefferson on the left, tending to his crops, and Bradley at right, asking his dad if he could lend him $5 until Tuesday.

Dear Boy, Prison? As in penitentiary? Have my enemies besieged you? What outrageous conspiracy have they spun to detain you thusly? Please delineate, as my fretful state elevates with each passing day.

Dear Father, Do not grieve, pondering a wrongful charge or that some affront to justice prevailed to deprive me of my liberty. I could not have been more guilty. In retrospect, I discern I should not have taken leave of my senses, imbibing insatiable quantities of spirits. Such dereliction diminished my ability to reflect upon the wisdom of my ways before robbing that bank. Lesson learned, papa.

Bradley, In God’s name, what hath thou embarked upon? I comprehend it not.  A Jefferson plundering the reserves of a bank? More importantly, when did my young son start taking to the drink? I beseech thee, for the love of our Lord, explain to your father what possessed you to ransack a depository institution?

Dear Father, I blame myself. I felt my pecuniary options were limited after I sold Monticello to those Egyptian fraudsters, who promised in return we would take ownership of one of the great pyramids. Imagine my chagrin upon learning they had no such title of ownership to grant us said pyramids. I shall never again endeavor to engage in commerce with grifting Egyptians.

Son, Surely ye jest! It cannot be that my cherished Monticello, of which I was the architect and builder, is no longer my place of refuge? How could you permit this? Are you daft?

Your Father – for the moment at least, TJ

Father, I guess I just was not thinking straight, ever since Mother passed.

Frivolous Boy, What in a French Harlot’s name (forgive my foul discourse) are you declaring now? That your mother, the love of my life, is with God? How came this to be? Answers! Now! Answers! 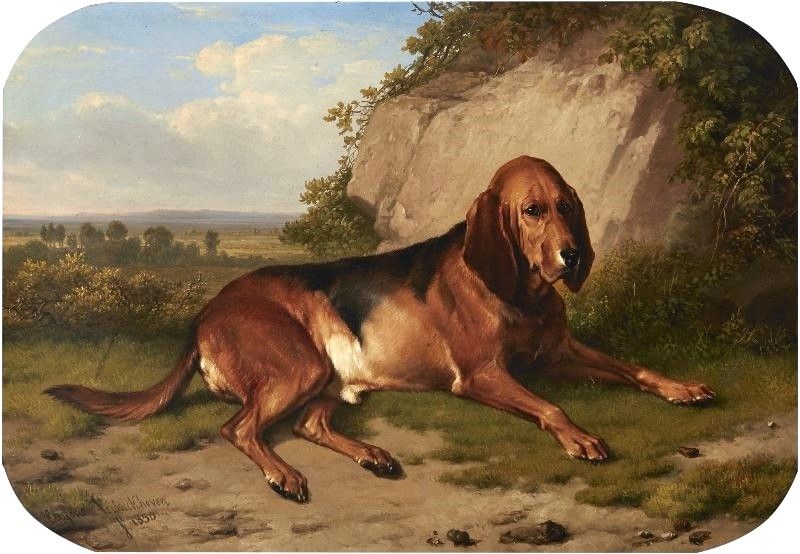 Jefferson loved his dogs, especially his pride bloodhound, Bailey, shown here. Jefferson, while a genius in many ways, made several mistakes in life – most notably entrusting Bailey to his son, Bradley.

Father, I did not want to bother you with trivialities. I know you’ve a full plate, feasting with French Kings and Viscounts. Be assured, Mother suffered no pain, as she was sound asleep when her rowboat careened over Niagara Falls. I am comforted knowing she no doubt met her Maker in an instant.

Muttonheaded Moron, I almost pause in dread, pondering the sagacity of imploring you for an elucidation of your mother’s passage on a rowboat destined for such treacherous waters. Withal, I can hold back no longer. What possible circumstance emboldened her to embark on such an ill-fated terminal voyage?

Father, I can merely speculate as to her motive for taking that ill-omened journey. But were I to hazard a divination, I might posit that she was ill-suited to a life of homelessness and prostitution.

F*ck 4th of July!, Homelessness? Prostitution?! We have countless properties suitable for dwelling, though not of the magnitude of Monticello. I am befuddled with consternation.

Dad, I was low on funds. Gambling is a surprisingly tricky business.

Son, Bradley, Gambling? You dimwitted toad! Just how much of my assets did you squander?

Dearest Dad, If you count your landholdings, farmsteads, and stock, along with the gold coins and other financial instruments, plus the horses and cattle, not to mention the slaves, well … all of it. However, nothing could part me from the quill pen with which you signed the Declaration of Independence. That will be worth thousands someday.

You Treacherous, Capricious, Malevolent Cad, I will be on the first ship bound for Baltimore. When next I gaze upon you, my reckless, foolhardy former heir, I assure you, I will seize that quill pen from your wretched hand and deposit it where no light shineth. You are no son of mine.

That was the final correspondence between father and son. Interestingly, little is known about Bradley Jefferson’s life after that last communique. Some historians point to a report of a dead body found at the base of Niagara Falls, with a quill pen and a copy of the Declaration of Independence stuck up his posterior. Could that have been Bradley? We may never know.

On a positive note, they eventually found Jefferson’s dog, Bailey. So the story has a happy ending.

[Postscript: Because once in a while there is a reader who can’t tell fact from fiction, let me set the record straight. Jefferson never had a bloodhound named Bailey, nor a son named Bradley. I also made up the character named Thomas Jefferson. No such person ever existed.]

© Tim Jones, View from the Bleachers 2021. Edited by Betsy Jones.