I’ve Survived Hell – Or as My Kids Call It, Disney World 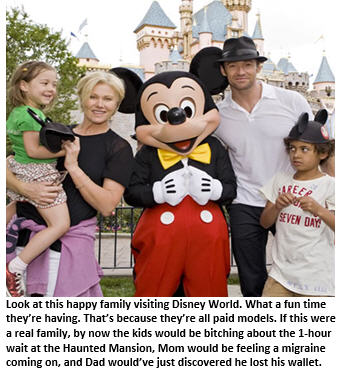 Remember way back when, before you had kids, how you and your spouse would go on romantic getaways to exotic destinations like Cancun or Paris or maybe Santorini? Ah, such relaxing vacations. But then you screwed up everything by deciding to start a family. Oh sure, having young kids doesn’t mean you can no longer go on vacations. It just means you can’t enjoy them.

By the time your kids turn seven, as summer vacation season approaches, they’ll begin the longstanding family ritual: complaining that every other child in the free world has been to Disney World – twice – “except for us! It’s no fair!” This is an excellent time to invite your kids to ask the Millers down the street if they might consider adopting them, since apparently “the Millers are way more fun parents than your mom and me.” I never particularly liked the Millers. I suspect the husband may be a metrosexual. But that’s a story for another post.

As surely as my Seattle Mariners will never win the World Series in my lifetime, it’s an equal certainty that sooner or later, you will buckle under the pressure of the relentless nagging and offer to take your kids to Disney World. And for that you have my deepest sympathy.

A trip to Disney World is the perfect vacation – if you like standing in line for hours at a time in sweltering 96-degree heat with 97% humidity, listening to your young children whining endlessly about how long all the waits for rides are. Usually by about 1pm on Day One you’re starting to seriously regret your decision to spend thousands of dollars that could have been much better spent on a brand new red Camaro instead. If this sounds like your idea of fun, then pack your bags and head to the airport for your very own Disney adventure. Then turn around and go back home. You forgot your four-year old, Ashley. Then strap Ashley and her adorable Disney-branded Lilo and Stitch backpack into her car seat and get ready for a not-so-memorable trip to visit Mickey and his pals.

Most families go to Disney World during summer vacation. And why not? The kids are out of school. And there’s no better place to be in July than central Florida – particularly if you enjoy the sensation of feeling like you’re on the surface of Venus. There is so much to see at Disney World. In fact, at last count, there were no less than seven different theme parks, including the Magic Kingdom, Epcot Center, Disney’s Animal Kingdom, Disney’s Hollywood Studios, two water parks, and, their newest attraction, Disney’s Magical World of Heat Stroke. 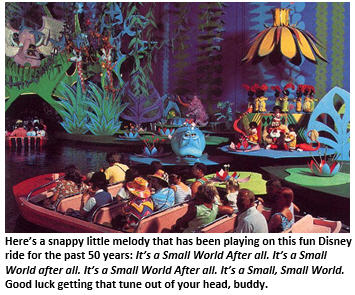 As you pull up to the Magic Kingdom, your kids will proclaim you the BEST PARENTS IN THE WORLD – a lofty status that will last for slightly less than an hour, after which you won’t be able to shut them up about how hot it is, how hungry they are and how you are undoubtedly the WORST PARENTS IN THE WORLD for forcing them to sit through The Hall of Presidents attraction when their friends’ parents would surely have done Splash Mountain instead.

Based on my own experience, I’d recommend that the ideal duration for touring around Disney World is approximately 90 minutes. Anything longer and you’re going to really wish you had used the time for something more enjoyable, like root canal surgery. Because you will be joined by over 100,000 other families today, be sure to plan on getting to the park early – ideally no later than 5 am. Otherwise, the closest lot you’ll be able to park in is Pluto 85 – conveniently located just two zip codes east of the park.

A better plan might be to take the Disney shuttle bus. It stops at every major hotel near the park. Just wait in front of your hotel for the next shuttle bus. It should be here in about 45 minutes. Then it’s just 30 minutes from your hotel to… the transfer station where you’ll board a second shuttle bus, which in roughly 25 more minutes will drop you off right at the main entrance to your Disney theme park. And within seconds after the bus leaves, you’ll realize you got off at the wrong Disney theme park. But don’t fret. The next shuttle will arrive shortly – in about 45 minutes.

By now, you may notice the time is already 11:15 am. So you better pick up the pace. Before you know it, your kids will start complaining they’re hungry. Not to worry. There are over 3,700 restaurants spaced at roughly 40-foot intervals throughout any Disney theme park. You can enjoy food that will appeal to every taste – so long as your taste is limited to burgers, fries, pizza, hot dogs, fried chicken, ice cream or, oddly enough, arugula salad with lemon-parmesan dressing. I know. Go figure. Personally, I recommend dining at the Country Bear Jamboree Saloon. The chicken there tastes surprisingly like chicken. 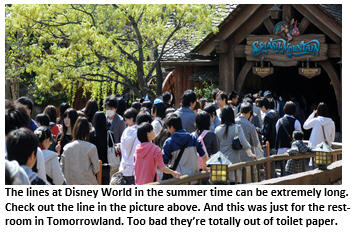 But the main reason kids love going to Disney World – other than to torment their parents – is for the rides. There are so many great rides to choose between. Should you start with Space Mountain? Perhaps Buzz Lightyear’s Space Ranger Spin? Or maybe The Pirates of the Caribbean? It really doesn’t matter which one you choose. They all will have one feature in common – a sixty-minute wait to get in.

You might want to consider a time-saving way to avoid the long lines by purchasing a FastPass. It lets you reserve in advance a set time slot for up to three different rides per day – all for slightly less than the cost of a year’s tuition at Stanford. But whatever you do, do NOT go on It’s a Small World. It is every bit as chirpy and annoying as it was when it opened in 1966.

Thankfully, Disney World has one ride that is well worth the wait – the ride back to your hotel in an air conditioned shuttle bus. It’s by far the most enjoyable ride you’ll have all day, I guarantee it.