Study says a dark day in America – Blacks are getting happier 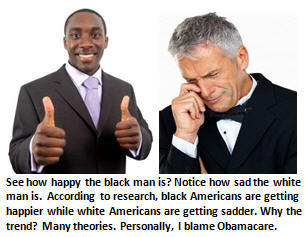 The study by the University of Pennsylvania, tracking the “happiness gap” between black and white Americans since the 1970s, reports that the gap has dramatically narrowed in recent years to the slimmest margin since the study’s beginnings. Fortunately for white Americans, they are, on average, still happier than their black counterparts – but not by much.

Even more alarming is the study’s finding that while blacks’ happiness has progressively improved over the past four decades, whites’ happiness has steadily declined. A spokesman for the National Association for the Advancement of Non-Colored People (NAANCP) argues that there can only be one conclusion to draw from this study: that over the past forty years, blacks have been deliberately and systematically stealing happiness away from whites, without even asking permission or giving so much as a thank you kindly, leaving millions of white Americans outraged and nervous about their futures. 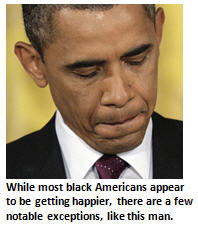 The study’s researchers claim there are other plausible theories for why blacks are getting happier: higher income levels, increased educational opportunities, a significant decline in lynchings, and dramatic strides in career advancement, all of which have fueled greater optimism about their future. In fact, in most states, blacks rarely have to fear getting arrested simply for sitting next to a white person at a Denny’s (with the notable exception of Mississippi and parts of Arkansas). “Why are black people in such a hurry to have more happiness?” asked NAANCP spokesman, Ferry White. “They stopped being slaves a long time ago. What more do they want, anyway?”

When asked what he thought about the NAANCP’s interpretation of the study’s findings, Carlton Hewitt III, a 57 year-old white software executive reflected, “To be quite honest, I am not as happy as I used to be. For the longest time I used to attribute it to the fact that I am getting older, my fitness is declining, I don’t have nearly enough saved for retirement and my eyesight is failing. But now I realize that the actual cause of my sadness is black people. What have I ever done to them?”

And according to the same study, the reversal in the balance of happiness is even worse for white women. Until recently they ranked as the second happiest group of all – just behind Disneyland theme park characters. But now these same white women rank as one of the least happy groups. The reasons for this sharp decline among white women’s happiness are unclear, but several men’s rights advocates speculate that it may be in part because women miss being barefoot and pregnant in the kitchen, waiting hand and foot on their working husbands, like in the happier 1950s. 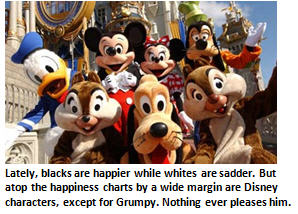 When a focus group of white people was interviewed about the study, all of them agreed with the NAANCP’s conclusions. When asked if perhaps they harbored any feelings of prejudice and resentment towards blacks who are improving their lot, the responses were unanimously dismissive. “That’s totally absurd,” snapped Reginald Spalding IV, adding, “Some of my best friends are people who have seen black people.”

Another white person, Anthony Leighton Cornwall (of the Rhode Island Cornwalls) was equally put off by the notion that he might harbor bias towards blacks, citing as proof of his racial color blindness that he once went to a Stevie Wonder concert, adding “I even listened to a rap song once for more than 10 seconds before changing the station.” He continued. “But when black Americans start grabbing for my happiness, that’s when I have to circle the wagons and protect my piece of the American dream.”

Carlton Van Wilkerson VI, the 26 year-old grandson of a wealthy shipping magnate, agreed with the NAANCP’s findings, noting how much harder his circumstances have become during this period of escalating black happiness. “Lately, I’ve been having difficulty making the payments on my 70-foot luxury yacht. For a while, I thought it was because I had recently been cut out of my grandfather’s inheritance. But now I realize it’s because somewhere in America, there is a middle class black family who is happier than they have ever been – I suspect because they’re probably getting my inheritance. It’s an outrage.” 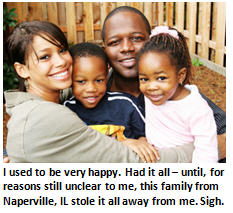 As further proof of its conclusion that black happiness is coming at the expense of whites, the NAANCP pointed out a startling statistic about a large automotive parts supplier that recently laid off 1,700 workers – revealing that a shocking 61% of those laid off were white, compared to only 32% who were black.

As troubling as the study may be for Caucasian rights advocates, there was one silver lining in the otherwise black cloud report: Native Americans appear to be feeling as miserable today as they’ve been for the past fifty years. So for millions of white Americans, the news isn’t all unhappy.

[Author’s note: As a member of an interracial family myself, I do not take lightly the issue of racism. I have written about racism previously in this blog. I am intolerant of bigotry of any kind – be it based on race, gender, ethnicity or sexual orientation – although I confess, that I have never met a Hungarian that I particularly liked. And don’t get me started about those annoying Lutherans. This week’s post was not poking fun at blacks. It was about people (whites) who scapegoat others (minorities) for their own problems, something that is never acceptable – unless the object of that scapegoating is a Hungarian. I can’t stress that point enough. – TEJ]