8,000 drunken sailors sent on a mission to capsize Guam 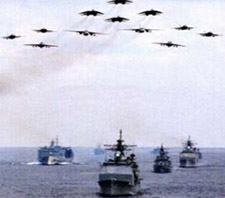 help us avoid another Katrina catastrophe, won’t you? Turns out the next imminent disaster we have to fear is ourselves – or more specifically, our own U.S. Navy.  If we don’t act fast, thousands of people on the tiny island of Guam stand to perish as their island capsizes into the sea. Don’t believe me? Listen to the ominous words of one informed federal government official.

Last week, Rep. Hank Johnson, D-GA. (right), was questioning Navy Admiral Robert Willard during a House Armed Services Committee meeting about the Navy’s plans to relocate 8,000 Navy personnel and their families to Guam. After noting at some length that the island is rather narrow, Rep. Johnson solemnly stated “My fear is that the whole island will become so overly populated it will tip over and capsize.” (I can’t make this stuff up. And, no he was not being facetious.) Admiral Willard paused and replied, “We don’t anticipate that.” You can watch this riveting testimony here.

The callous Navy admiral only cares about finding a home for his 8,000 drunken sailors – at least I presume they’re drunken since you always hear the word “sailor” preceded by “drunken”. America needs to wake up and do something to save the innocent people of Guam from a fate worse than a “Round one of American Idol” marathon weekend on the Fox Channel.

Thank God for Rep. Johnson’s clarion call to get the word out to the American people. Otherwise, this nefarious deed might already be in motion. This is a dark hour for America – unless we band together to put up a citizen’s naval blockade against the U.S. Navy. Perhaps some of these 8,000 sailors don’t even know they are being sent on a mission of destruction. But there simply is no time to sit idly by. 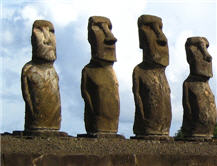 And why Guam, anyway, an island populated largely by American citizens? Why not Midway or Tonga or Tuvalu? Heck, why not Easter Island, where no American lives would be at risk? There’s nothing going on there but those spooky looking statues (left).

Not surprisingly, since the Congressman’s comments, the Navy top brass has been conspicuously tight-lipped about their plans to destroy Guam. Since the Congressman leaked word last week that the southern part of Guam (where the naval deployment would be based) could likely tip over into the ocean, Guam’s local officials have been quick to implement emergency safety measures to keep the island from doing just that, including…

But now a brief timeout to learn more about this fascinating little-known island paradise called Guam. Bring your kids in for this part. They just might learn something. 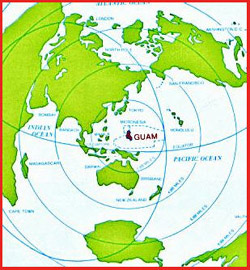 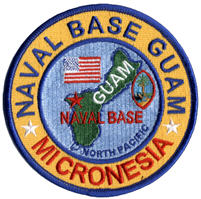 Okay, time to get back to the blog. Please send your kids out of the room.

Before the break we were talking about how the Navy is planning to send 8,000 blood-crazed sailors to submerge the island of Guam into the Pacific Ocean for no apparent reason other than to impress their girlfriend Gloria. (Oh, it might also have something to do with the fact that the Japanese have decided they want their island of Okinawa back and have informed the U.S. Military that its bases must be closed this year.)

Guam is a tropical paradise with palm trees, sandy beaches and just one teensy weensy little problem. It has become overrun by an infestation of the venomous brown tree snake (left), believed to have been introduced to the island as a stowaway on a transport ship at the end of World War II. Brought there by… you guessed it, U.S. Navy sailors. What is it with you Navy guys that you have it in for the nice Guamatarians?

The peace-loving local inhabitants of this idyllic island have done nothing to deserve the horrible fate that’s in store for them if we don’t act quickly. The US military has already all but taken over this lovely Pacific island in the past half century. Naval, air force and coast guard bases now crowd over 30% of this small island. It is projected that with this new invasion of sailors, it could top 40% – that is, if the island does not become a modern day Atlantis and sink from the crushing weight of the incoming sailors with their “Gloria” tattoos.

Thankfully, many celebrities are stepping forward to lend a helping hand. Outdoor artist Christo has offered to create a stunning pink floating “waistband” around the entire island to help keep it afloat and attractive. Sean Penn is reportedly donating 10,000 sets of the board game Battleship, so locals can sharpen their skills before the actual battleships arrive. And the famed humanitarian, Bono, is rumored to be pulling together musicians from all over the world for a “We’re Not Guam-a Take It” fundraising concert to be held on Guam’s Liberation day.

But will these measures be enough? I urge you to call your Congressperson or Senator to put a halt to this impending disaster being plotted by the insidious U.S. Navy. There is still time to stop the annihilation of Guam. Do whatever you can to help out. Send donations of food, water, helium-filled balloons, or floaties for the kids. I’m doing my part by buying all the fresh Guama juice I can at my grocery store and refusing to purchase any naval oranges until the U.S. Navy cancels their barbaric plans, turns their ships around and heads away from Guam….. and over to Easter Island where they belong.

That’s the view from the bleachers. Perhaps I’m off (the naval) base.