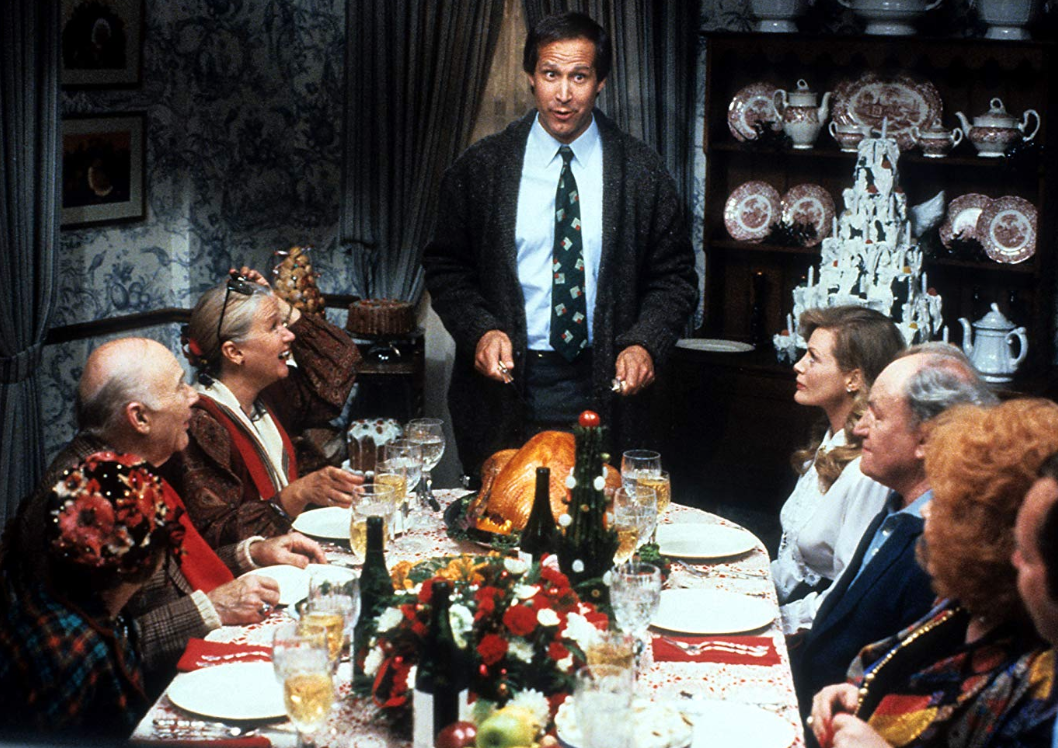 It’s Christmas dinner, a time of giving thanks and sharing good food and stories with your family, and occasionally with some quirky relatives who make things, well, let’s just say, interesting.

The weather is getting colder. The hours of daylight are rapidly waning. And Costco has inflatable eight-foot Snow Globes on sale (although in full disclosure, these went on sale in early September). The holiday season is officially upon us.

An important tradition is the family Christmas dinner with loved ones, and, sometimes with not-so-loved ones, by which I mean your cranky, Fox News-watching, conspiracy-theory-loving Uncle Howard, who announces three days before Christmas that he’ll be joining you for the feast, even though you didn’t actually invite him.

Unfortunately, all too often the sumptuous Christmas repast can be accompanied by heightened tensions as we struggle to avoid getting sucked into a heated argument with relatives who are oblivious of their behavior. If you’re anxious about the impending arrival of Uncle Howard, who will most likely be carrying a half-consumed case of Budweiser, don’t despair. It’s going to be okay. You’ll get through this in one piece, I promise.

When Uncle Howard makes his grand entrance two hours late with Carlotta, his latest practically-prepubescent fling, on his arm, be sure to greet them with a polite hug. Try to ignore their matching red MAGA hats – and the large tabby cat draped around Carlotta’s neck. You might want to lock Otto, your schnauzer, in the basement, lest his very strong prey instinct kick in and he chase the kitty around everyone’s feet.

Remember, above all else, DO NOT BRING UP POLITICS! When Howard snipes, “So, who did you vote for, for president in 2020,?” just smile, say, “There was an election in 2020? Who knew?” and quickly change the subject.

When all are seated around the festive table, take this opportunity to fan the flames of familial bonding by sharing how your wife has helped you to become a better husband. Well done. You could not possibly have guessed that Howard would use words of harmonious wedded bliss to torch his ex: “Speaking of wives, my ex totally cleaned me out in the divorce. And now she wants my house. Over my dead body…” Okay, maybe you should have foreseen that one. Time to change the subject – again.

I recommend football. What balding senior citizen with a hot young girlfriend doesn’t like to brag about his knowledge of sports. So, you open with, “Hey, looks like another rebuilding year for the Seahawks, eh?” Who knew Howard’s comeback would be, “Nah, pro football has been ruined for me – ever since all those Negroes showed their hatred for America by refusing to stand for our National Anthem.” I know what you’re thinking – did he just say “Negroes?” Bite your tongue.

Okay, so talking sports was a bad idea. You need to find an innocuous topic that no one can argue about. Ah…the weather. Conversation doesn’t get blander than that. You causally mention, “I hear we may get six inches of snow today. Looks like we might have a white Christmas after all.” But to your dismay, Uncle H storms back, “Gonna snow? See, I told you snowflakes that global warming is a hoax. All this hysteria about climate change is just liberal propaganda. I know because Sean Hannity says so.”

Okay, I’ll admit, I didn’t see that one coming either. Still, it’ll be fine. Deep breaths. Deep, deep breaths. Just then, the doorbell rings. Who could that be? To your great surprise, it’s your cousin Claire with her new wife, Monica. “Hey, Couz! We happened to be in the neighborhood and thought we’d stop by. Are we too late for chow?” What could possibly go wrong now?

As the gracious host you are, you welcome your unexpected guests to join in the gaiety. Out of left field – or rather, far right field – Howard walks up to Monica, smiles and remarks, “Howdy, girls. You know, 90% of lesbians are witches. You’re both gonna burn in Hell. But in the meantime, Merry Christmas. Or do you not celebrate the birth of our savior?” Looking back at you, he smirks, adding, “Or am I required to say, ‘Happy Holidays’ so I don’t offend all your liberal friends’ feelings in their communist War on Christmas?” 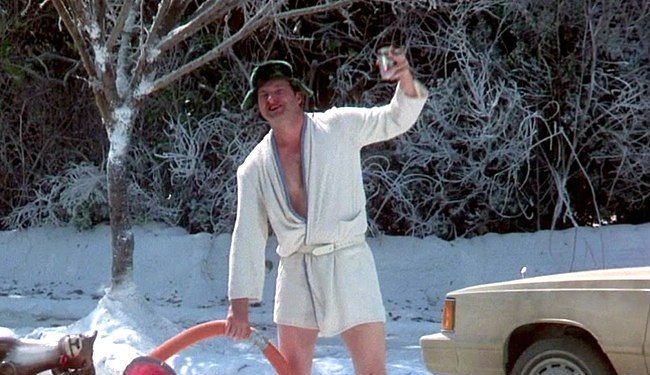 One thing that can create some anxiety at Christmas is the arrival of the unexpected relative who’s far more delighted to see you than you are to see them. No worries. What could possibly go wrong?

Somehow you are able to corral everybody back to the dinner table, making last-minute strategic seating alterations. Calm seems to have returned.

You gather everyone in your gaze and suggest each person share what they’re grateful for at this special time of year. You set an excellent example by observing, “I am thankful for my family, our good health, and our lovely home. We are so blessed.” Nice try. Then Uncle Howard chimes in, “I’m thankful Carlotta is way hotter than my nasty ex-wife. And I’m thankful to God for choosing Donald Trump to be our greatest president ever. And once his Supreme Court proves the election was stolen, he’ll lock up Biden, Obama, and Hillary.”

Things quickly unravel. Everybody starts shouting. Claire angrily hurls a dinner roll that hits Howard smack in the eye. Monica accidentally steps on Carlotta’s cat, who lets out a blood-curdling MEEOOOOWW!!!!. This sets off a barking frenzy by Otto, which startles Grandma, who jumps up from her wheelchair, accidentally knocking over the candelabra, which sets the tablecloth on fire. That activates the sprinkler system, completely ruining your wife’s new dress and expensive coiffure.

Baby Sally starts wailing, which further terrifies the cat, which suddenly hurls itself through the kitchen window, followed by Otto, who you did not know could leap that high. All of which amuses your kids to no end, as they laugh hysterically.

Claire screams something about Howard being a disgusting racist pig, to which Howard yells back, “At least I won’t burn in hell for being a commie lesbian!” Christmas with the relatives has descended into total pandemonium. When the smoke alarm starts trilling, you merely shake your head as you realize your apple pie in the oven is now toast.

Let’s face it. Despite your best efforts, your family Christmas dinner has  turned into a Chernobyl-level meltdown. And that’s not even counting the 150 stitches the cat and dog needed for their acrobatics, smashing through the kitchen window. To avoid another disaster next holiday, I suggest you seriously consider entering the Witness Protection Program, so none of your relatives can locate your address. Sure, that may sound drastic. But it’s either that or listening to Uncle Howard’s tirade at the next family gathering about how the COVID pandemic was a Chinese hoax, and the vaccine is a nefarious plot by Anthony Fauci to kill conservatives with micro-chips.

Good luck. I hear Montana is a nice place to start a new life.

[Photos are stills from the 1989 film National Lampoon’s Christmas Vacation.]