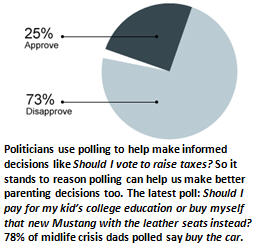 When it comes to parenting, I don’t always make the best decisions. I’m not always sure what the right thing to do is in a difficult situation.

Like the time our elder daughter begged and pleaded with me to let her drive the car to the mall. It was a sunny day. Traffic was light. And she had behaved extremely well all week long. So against my better judgment, I said okay. Two minutes later, she smashed the car into a stop sign barely 100 yards from our driveway. A part of me can’t help but wonder whether in retrospect I made a mistake giving in to the incessant pleadings of an eight-year-old to drive my minivan.

Sometimes my wife questions my ability to make the right call. Heck, she rarely listens to any of my opinions unless at least four complete strangers tell her the exact same thing – which got me to thinking: maybe the way for me to make better parenting decisions is to poll the opinions of total strangers.

In the most recent presidential election, the polls were incredibly accurate forecasters of people’s voting preferences. Nate Silver’s 538 blog accurately predicted the Electoral College winner in all fifty states. Politicians use polls all the time to help them decide how to vote. Should we legalize gay marriage? Poll your constituents. Should we cut defense spending? Do a poll. Should we ban hurricanes during the last week of a presidential campaign? (97% of Republicans resoundingly voted yes.)

I figure, maybe I can learn a thing or two from those politicians. That’s why I’ve decided to stop listening to my inner voice when confronted by a difficult parenting issue. Now I make all my important parenting decisions by means of polling. I have benefitted from the collective wisdom of a much broader community in many matters:

Poll Question #1: What punishment is appropriate for our elder daughter, who missed curfew for the third time in two weeks, giving the lame excuse that she missed the last bus from the library and had to walk the six miles home? According to my poll of 328 Boston Red Sox season ticket holders: 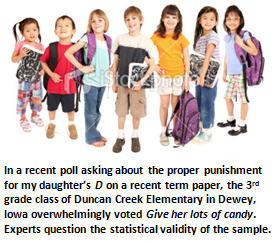 Poll Question #2: The last time our younger daughter cleaned up her room, Michele Bachmann was leading in the Republican race for president. Her room now looks like a home in the wake of Hurricane Sandy.  What should I do? I polled 147 Guatemalan goat herders and here’s how they weighed in on the matter:

Poll Question #3: Our two teenage daughters squabble all the time. Lately their arguments have escalated into nasty name-calling with curse words and profanity. What should I do about this the next time they start after each other? I polled 275 Amish families in Lancaster, PA, and here is how they responded:

But after they voted, they discussed the issue further. And to my surprise, they all changed their minds – and unanimously voted for shunning. 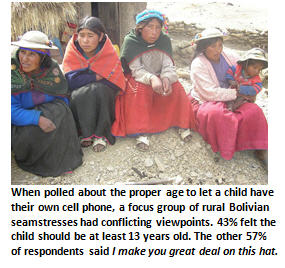 Using this polling system has dramatically reduced my stress level. I can’t actually say it’s helped me arrive at any better parenting decisions, but at least now I can point the blame somewhere else. Next time my wife gets on my case about a bad parenting decision and screeches, “Who in the world thought it was a good idea to let our daughter have a pet llama?” My response is simple: “A focus group of Peruvian llama ranchers, honey.”

In a few cases, however, the feedback has been perplexing. I polled a group of Tea Party activists about how to discuss the dangers of drinking and driving with my college-age daughter. 87% of respondents said the critical thing I need to do is to lower taxes, repeal Obamacare, and get the federal government out of my life. I’m not really sure what this has to do with the dangers of drinking and driving. Maybe if I dress up as George Washington it will make more sense to me.

My wife is not on board yet with my new parenting approach. She is old-fashioned. Amusingly, she still thinks the best approach is to stay calm, be clear in our expectations and apply logical consequences for our children’s poor choices. Sounds like way too much work, if you ask me.

Frankly, I’m not so sure my wife’s outdated parenting methodology works any better than my new system. So I polled 195 soccer dads about which approach they feel is more effective, mine or hers. They were divided on the question. But there was an overwhelming consensus on a related issue: They all agreed the coach does not give their kid nearly enough playing time.

That’s the view from the bleachers. Perhaps I’m off base. Better check what the polls are saying.