The Island of Exceptional People 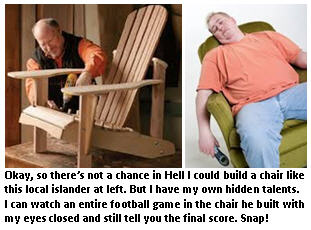 Our girls are grown and living far from home now. So a few months ago, my wife and I decided, somewhat impulsively, to sell our suburban house and move to a quirky but lovely island 75 miles from the world we had known for a quarter century. We now live in an idyllic setting on Camano Island, overlooking Puget Sound and snow-capped mountains. Ah, the island life.

Camano Island has a well-earned reputation as a haven for artists (one reason my artist wife was drawn here). In our brief time in this new community, we’ve met dozens of people. The one constant among them: They are all exceptional people – which is starting to get on my nerves.

Seriously, it’s really starting to annoy me. Apparently, in order to live on this island, you must be the next Picasso or Santana or Hemingway – and you must swear an oath to spend at least 30% of your time volunteering to protect the rain forest or bottle-feed orphan kittens. Don’t ask me how I managed to sneak past the island’s security. Some border guard must have called in sick the day I arrived.

Everybody on this island seems gifted in some way. If you haven’t published a book of sonnets or are unable to play the lute, you’re viewed as, well, a bit of a disappointment.  Last week, I met a novelist, a painter, a sculptor, and a quilter – and that was just in the checkout line at the grocery store. By contrast, my biggest artistic achievement was playing Frère Jacques on the recorder in the 6th grade orchestra. Not to brag, but I totally crushed it.

In addition to being artistically gifted, everybody I’ve met is also great with their hands. If I compliment someone on their stone fireplace, undoubtedly they designed and built it themselves, using rock they gathered from some river in Montana. If I meet someone who flies, you can bet that their plane is a replica of a 1943 Piper Cub – which they built by watching YouTube instructional videos. And don’t bother asking someone to play golf here on a Thursday because Thursdays are Community Barn Raising Day. 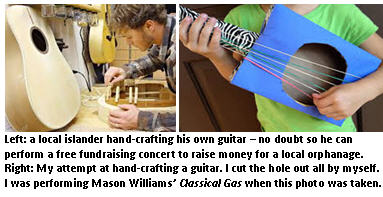 If you’re a musician (which on this island means you play at least four instruments), it’s a given that you handcrafted your violin, something you can be seen playing every Thursday during breaks between community barn raisings.

I used to read Nancy Drew novels to my kids when they were young. People here read their kids Cicero’s Orations – in the original Latin. Turns out that nobody here is trying to keep up with the Joneses. They passed this Jones long ago.

But what’s most galling about these islanders is that despite all their talents, they’re also annoyingly nice.  Everyone on this island is friendly. They would gladly offer a stranger a cold one – no doubt from their stock of homemade micro-brewed beer.  Worse yet, everybody here volunteers. They will never brag about all the things they do for others because, well, that would be boastful. But trust me, if they are not busy building a deck from driftwood they gathered from the beach, they’re building a new animal shelter – unless it’s Thursday, of course, because Thursdays – you’re way ahead of me, I see – they’re busy raising barns.

I quickly realized that I would seriously need to step up my game – before they kicked me off this Fantasy Island. So I’m committed to making the following changes to show these people I can keep up with them. I am going to:

Oh, who am I kidding? I don’t have the talent or the attention span to do any of this stuff. For me, it’s a major artistic achievement if I can remember the lyrics to a Beatles song. There is simply no way I am going to be able to keep up with all these annoyingly exceptional people.

That’s why I’ve decided to put our house up for sale. I told my wife we need to move to another less stressful community, one where I’m not always feeling so inadequate, a place I’ll feel more at home. Does anyone know where the Island of Mediocrity is located?