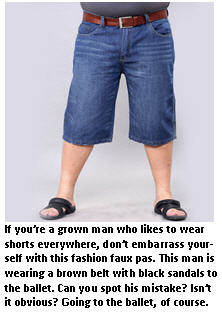 Few things reveal more about the kind of man you are than how you dress. Fashions go in and out of style, but some things are timeless – like Members Only jackets. They are as embarrassingly out of fashion today as they were when first introduced in 1980. Speaking of fashion, another timeless trend is wearing shorts. Some men prefer to wear them all the time. I am one of those men. And I’m not embarrassed to show my legs in the dead of winter, no matter what my wife says.

I have always been a pioneer of haute couture. I’m not sure where I cultivated my “road less traveled” fashion sense – perhaps it was my private school education, which required me to wear the same grey wool pants, grey shirt and black tie to school every day for twelve years.  In ninth grade, while my classmates were wearing their straight-legged khaki slacks on a Saturday night date, I was stylin’ in my room in my purple corduroy bell bottoms. The fact that I never had a single date on Saturday night during ninth grade is strictly coincidence.

Throughout my youth, my fashion sense grew ever more avant-garde. Take my exotic collection of Far Eastern apparel. Strutting down the street in my lime green Nehru and silver Capricorn medallion, I left people speechless with envy. I could tell by the way girls shyly averted their glance as I approached that they knew I was not like other guys.

Now I wear shorts. And not just when I’m mowing the lawn, wearing my “Support your right to arm bears” T-shirt. I wear them while jogging, doing errands or even clothes shopping for, well, shorts.

Maybe you’re one of those uptight traditionalists who thinks that shorts are only to be worn in limited circumstances, such as: 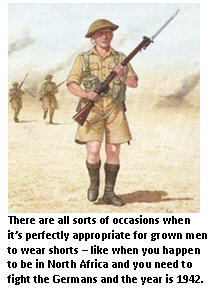 The truth is, it’s time we men declare our fashion independence. Who says we should wear a suit and tie at the office? Who says Crocs don’t go with dress pants? Who says we can’t wear the same underwear three days in a row? Er, um, where was I? Oh, yes. My point is we should be able to wear shorts whenever we want. This is America. America invented shorts – unless you count the Ancient Romans, who also wore shorts 2500 years before America invented them.

The following are all completely appropriate occasions for men to don shorts: winter walks along the beach; any sporting event where the athletes scratch themselves in the groinal region; while walking the dog; casual dinner parties; formal dinner parties; and of course, weddings. Okay, perhaps I exaggerated a tad. After all, what man would ever be caught wearing shorts walking their dog? Every man knows, walking the dog is the wife’s job.

Any French man over age eleven would never be caught dead wearing shorts. That’s because he would surrender first. Seriously, in France, the self-proclaimed fashion capital of the world, men in shorts is considered a fashion crime scene. To that I say – “Let them wear shorts!” because when has any red-blooded American ever done ANYTHING the way the French do it, am I right? 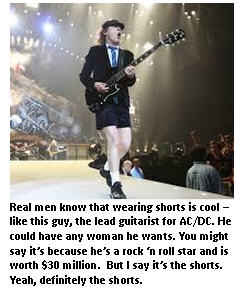 Before you show up in shorts to make your formal marketing presentation to your company’s Executive Committee, let’s go over a few fashion basics:

Don’t wear black socks up to your knees while wearing shorts. That just looks ridiculous. The preferred color for knee socks is white.

Don’t wear a jacket and tie while wearing shorts, unless you are attending a Catholic boarding school in Britain or you’re this guy (left).

Don’t wear suspenders with shorts – unless you work at TGI Fridays and you’re also wearing several pieces of flair. Then it’s totally cool. Of course, why you’re still working at TGI Friday at the age of 47 is another issue I think we should discuss at another time.

Don’t wear shorts in public if you have excessively hairy legs. Or at least cover them up with very fashionable leg warmers like Jennifer Beal wore in the 1983 film Flash Dance. Very sexy.

So if you’re like me, join me in coming out of the closet and proudly showing off your legs. Perhaps I phrased the previous sentence poorly. My point is, it’s fine to wear shorts 12 months a year, any time, any place – well, almost any place. My wife still won’t forgive me for the time I wore shorts to her Aunt Mildred’s funeral. But in my defense – my shorts were black.