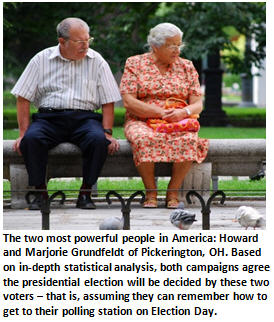 With each passing week, the 2012 presidential race is getting tighter and tighter. The most recent Gallup poll has it at 49.99999999% for Romney and 49.99999999% for Obama. A dead heat. Scientists have discovered molecules with more space between them than these polling numbers.

Just three months ago, the number of battleground states had narrowed to eight. In the past month, it has narrowed even further – to just one state: Ohio. Both candidates have been spending so much time in this state they now know most Ohioans on a first-name basis, as well as their pets.

Political pundits argue that as Ohio goes, so goes the election. Both parties’ campaigns have dissected the Buckeye State county by county, city by city, donut shop by donut shop. They have narrowed down their focus to one household in a small town in central Ohio. Using sophisticated statistical analysis, both campaigns now believe the election will come down to which candidate can win over the final two undecided voters remaining in America: Howard and Marjorie Grundfeldt of Pickerington, Ohio. As the Grundfeldts go, so goes the election.

And what better way to determine our next president than to entrust this crucial decision to these two charming, albeit somewhat out-of-touch, vision-impaired senior citizens. Howard, age 78, is a retired auto mechanic who has never set foot outside of central Ohio. For the past 54 years, he’s been steadfastly married to his high school sweetheart Marjorie, age 76, a retired middle school orchestra teacher. Howard still calls her his little tuba.

Howard and Marge’s favorite pastime is watching Wheel of Fortune and Matlock reruns. On Friday nights they go out on the town, by which they mean Bingo Night at the Lost Shepherd of the Mall Methodist Church. Okay, so they don’t lead the most exciting lives. Their only health challenge – other than their poor hearing and vision, high blood pressure, asthma and increasingly arthritic hips – is a recurring difficulty remembering details like where they last put their teeth and what day of the week follows Tuesday.

Deciding whom to vote for this election will be no small challenge for the Grundfeldts. Like the time Howard spent three hours in the local hardware store, unable to decide whether to buy a box of 12 & 3/8 or 12 & 1/8-gauge round wire nails. He eventually forgot why he came into the store in the first place, suspecting it might have had something to do with mulch, and went home empty-handed. 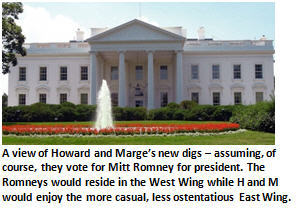 Marge is no better about making decisions. She once labored over a cherry pie she was baking for the local middle school auction. Having lost the recipe, Marge could not decide whether the pie required a pinch of salt or just a dash. Ninety minutes later, no closer to a decision, Marge threw caution to the wind, opting instead for a smidgen.  So, deciding for whom to cast their vote for president is probably going to require a bit more time and effort.

Howard and Marge see eye to eye on just about everything – except which orchestra was better, Glenn Miller or Tommy Dorsey. When it comes to politics, they’ve always voted the same as each other. Based on what they understand from watching the nonstop barrage of political ads on TV, they both agree that Obama will be stronger on the economy, defense, healthcare and prescription medication for the elderly. On the other hand, they’re fairly convinced that Romney will be better on prescription medication for the elderly, healthcare, defense and the economy. They’re still undecided.

They also share concerns about both candidates, stirred by some rather explosive campaign ads. They worry that Obama’s Muslim background and his formative years spent in a terrorist indoctrination camp in Indonesia may make it hard for him to decide whose side he’ll be on when Kenya bombs America. They are also nervous about Obamacare’s mandatory provisions requiring children of elderly Americans to administer euthanasia when their parents reach 75 – even though that provision does not take effect for two more years.

On the other hand, they are not totally comfortable with Romney’s plans to turn over their entire life savings to millionaire oil executives living in the Cayman Islands. And they question the need for Romney to eliminate Medicare for anyone over the age of fourteen, as the TV commercials they’ve been watching claim. 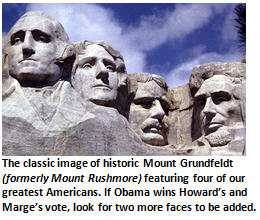 Both campaigns are pulling out all the stops to get the Grundfeldts’ vote. The Romney campaign is replacing Pat Sajak on Wheel of Fortune with Mitt Romney as host for the final three weeks of the campaign. Contestants will guess the letters that spell out popular expressions like Obama hates white people and Jesus. Romney has assured the Grundfeldts they can choose any one of his private jets they want, and he has pledged that his monthly tithing of 10% of his income will be redirected to Howard and Marge – if they just vote for Mitt on Election Day.

Not to be outdone, Team Obama is fighting back. They’ve offered free hip replacement operations for Howard and Marge and all of their friends down at the Knights of Columbus Hall. In addition, he has made arrangements for both the Glenn Miller and the Tommy Dorsey Orchestras to perform a private concert for them in their backyard. Obama has even personally assured Marge he’ll appoint their under-achieving grandson Jason to the next opening on the Supreme Court. This could be just the break Jason needs to finally turn his life around and get off the crack pipe once and for all.

Deciding whom to vote for won’t be an easy decision for Howard and Marjorie Grundfeldt. In the end, it may come down to someone clearly articulating a compelling answer to the most fundamental question weighing on their minds: Who exactly is running for president this year, anyway?

.  If not for me,  then do it for Howard and Marge Grunfeldt of Pickerington, Ohio. It just might sway their vote. Probably not. But what if it did?