[For a look back at my 2010 predictions for the year 2011, click here. You will be amazed at the accuracy of some of my prognostications.] 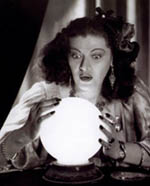 Every January, since this humor blog launched back in 1975, I take time out to gaze into my crystal ball (that’s my wife playing around with it at left – I hate it when she does that; she almost broke it in 2007) and make my forecast for the year ahead. Often people are stunned by the incredible [lack of] accuracy of my forecasts.

Hopefully very few of you will go rummaging around in the archives for my predictions from last year. In retrospect, I have to admit I erred in a few of my prognostications.

Here are some of my PREDICTIONS FROM LAST YEAR that did not turn out quite as I had predicted (Note to self: Make a note to upgrade to Crystal Ball Version 3.0 before next year):

You heard it here first: The ‘bromance’ film The Hangover will nudge out Jack Ass 3D for Best Picture at the Academy Awards, and Mike Tyson will win Best Supporting Actor, for his portrayal of, well, Mike Tyson. Avatar will be a total commercial flop at the box office and be completely shut out come Oscar time.

Goldman Sachs, having earned record-breaking profits only two years after the financial meltdown it helped cause, will make amends to the nation and singlehandedly solve the nation’s debt crisis by offering to pay down the entire US federal debt – and still have enough left over to pay each of its executives their annual $1 million year-end bonus. (Well, I got the $1 million bonuses part right at least.) 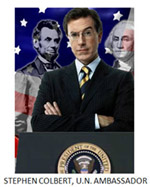 President Obama will surprise his critics by selecting Stephen Colbert of Comedy Central’s The Colbert Report (right) to be the USA’s next ambassador to the United Nations. Colbert’s first U.N. resolution, a condemnation of North Korean ruler King Jong Il’s hairstyle (on human rights grounds), is unanimously adopted by the U.N. General Assembly.

In a period of unprecedented political bipartisanship, the leaders of both major political parties will sign a “peace accord” to end all their partisan bickering and name calling once and for all and will come together to sign the wildly popular healthcare reform bill.

After three years of trying to make sense of the phenomenon, the American public will finally figure out what the heck is the point of Twitter.

Sarah Palin, having had her 15 minutes of fame, will fade into obscurity and never be heard from again.

Okay, I admit it. 2010 was not one of my better years for prognosticating. Let’s face it, I probably won’t do any better for 2011. So this year, for a change, I thought I would gaze further into the future – 30 years out – to the year 2041. Why so far out, you ask? Because, according to my doctor, the odds are 7 to 2 that I won’t be around by then. So I really won’t care how far off the mark I was. Let’s get started.

The World: The war in Afghanistan, now in its 40th year, will show signs of winding down, due in part to the fact that there are only 167 people still living in Afghanistan.

Hopes for a permanent Israeli-Palestinian peace accord will rise when the Israeli Prime Minister extends an olive branch, offering to let Palestinians claim full control over Jerusalem as their undivided Capitol. Hopes will fade once more when it becomes clear he was referring to Jerusalem, Ohio.

Politics: The United States of America, a wholly-owned subsidiary of the People’s Republic of China since 2026, will elect its first non-human as president, when the Sony QRIO-400, Sony USA’s fourth generation robot with artificial intelligence exceeding that of any human being, will win the election. Sony QRIO-400 will narrowly defeat the 55-year-old former rock legend, Senator Gaga, from the state of Key West (the 53rd state), in the closest presidential election since New York Governor Alex Rodriguez narrowly edged out New Jersey Congresswoman Snooki in the 2028 election.

Mark Zuckerberg, Prime Minister of the breakaway Republic of Facebookistan, will announce a truce in his longstanding cyber war with the nation of Googleonia over the two nations’ longtime territorial dispute over the region formerly known as northern California.

The Economy: Thanks to new discoveries of massive oil and natural gas deposits in the Arizona region known as Texaco Cliffs (formerly known as Grand Canyon National Park), it will be another record-breaking year for oil companies. Those consumers who still drive gasoline-powered antique automobiles will benefit too, as the price of gasoline plummets to under $220 a gallon.

The employment situation will improve for the third year in a row, for robots and droids. For humans, unemployment remains flat at around 87%, thanks in part due to the fact that the only jobs currently available to humans are coffee drive-through barista, circus lion tamer and NFL cheer leader. No, wait. My bad. Just lion tamer and cheer leader. Sorry, people. The robots will have taken all the barista jobs too. 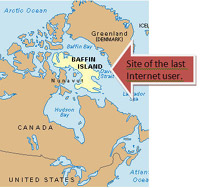 Science & Technology: 2041 will see the final demise of the Internet after decades of being plagued by viruses and slow performance. The last known Internet user – an 87-year old Inuit fisherman from Baffin Island, Canada – will pull the plug and throw his computer modem out onto the Arctic pack ice. (Correction: The Arctic pack ice will actually have disappeared permanently several years earlier, in 2026.)

The successor to the Internet, the Skin-Implanted Connectivity Chip (or SICC) will have been successfully implanted in more than 72% of humans, giving them instant 24/7 3D virtual connectivity anywhere in the world – except for a six- block section of downtown Manhattan, where reception is still rather spotty.

Transportation: New improvements in aviatic autoliners (otherwise known as flying cars) will take another step forward, now that the auto port re-fueling stations are finally open for business on the Moon (three years behind schedule). In a related story, Starbucks will announce plans to build 7,500 coffee bistros on the Moon by the year 2045.

Speaking of cars, China, the leader in auto manufacturing, will announce that the next generation of H2O-powered vehicles will get better fuel economy than previous water-fueled models. Leading the way, the new Hummer Hydrate, at an impressive 450 miles per gallon, which is easily re-fueled by means of Hummer’s patented custom-fitted garden hose (hose sold separately for $11,999). In a related story, BP will announce plans to purchase glacier-covered Greenland from Denmark, ensuring enough fuel to keep American motorists driving for at least 5 more years.

Travel & Leisure: Thanks to the long-awaited mass commercialization of time travel in 2037, time travel virtual vacations to exotic destinations will have become routine by now. Complications will emerge when 32,000 South Florida retirees travel back to the year 2000, change their butterfly ballot vote to Gore. Nice try, but Bush still wins the election the second time around.

Celebrity News: Lindsay Lohan will celebrate her 55th birthday this year by completing her latest rehab stint, proclaiming she has finally overcome her addiction to Diet Snapple Ice Tea. In her press conference leaving the Whitney Houston Clinic, Lohan hints that her next addiction will involve some type of breakfast cereal. My crystal ball’s hazy but it looks like it could be Captain Crunch.

The nation will mourn the shocking death of former President Mark Wahlberg in a fishing accident off the Pacific coast of Utah. President Wahlberg will probably best be remembered for his annual State of the Union addresses, in which he always delivered his speech without wearing a shirt. 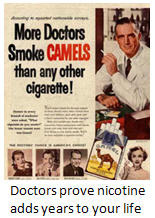 Health & Fitness: After a 15-year longitudinal study, scientists will conclude that a rigorous program of daily weight training, yoga,  and aerobic activity poses serious health hazards to middle-aged people over the age of 110.

The Surgeon General will reveal what has long been suspected: A diet of low-fat, high fiber foods, low in sodium and sugar, poses dangerous health risks and recommends a diet rich in red meat, processed starch, and ice cream products. In a related story, the tobacco industry will cheer the results of new research from the American Medical & Tobacco Association that proves once and for all that a daily regimen of nicotine and carcinogens can add several years to your life.

Well, those are my predictions for 2041. Be sure to put a note in your 2041 virtual calendar to check back to this blog and see how well I did. In the remote chance in 2041, my body has become a hologram or has been stashed away in some deep freeze storage pod while scientists work on a way to bring people back to life, no worries. Just rent yourself a time machine, go back in time to January 2011, track me down, and let me know how I did. Many thanks.

That’s the view of the future – as seen from the bleachers. Perhaps I’m off base.